EXCLUSIVE: Sen. Chuck Schumer, in an exclusive interview with theGrio's April Ryan, said of Judge Jackson: "She belongs on the court. Plain and simple."

The quest to confirm Judge Ketanji Brown Jackson to the U.S. Supreme Court — and make history in the process — is officially underway. The circuit court judge for the Court of Appeals in the District of Columbia visited the Capitol on Wednesday to meet with several senators, both Democrats and Republicans.

The 100-member U.S. Senate is expected to hold a full vote on Judge Jackson’s nomination as early as April 8, Senate Majority Leader Chuck Schumer announced. If confirmed, Jackson, 51, would become the first Black woman to sit on the Supreme Court.

Schumer, who was one of the senators who met privately with Judge Jackson on Wednesday, sat down with theGrio‘s April Ryan just hours after the meeting.

“I was the first person she met within the Senate. And what a meeting it was. “Even before the meeting, I saw how terrific a candidate she would be,” Schumer told theGrio. 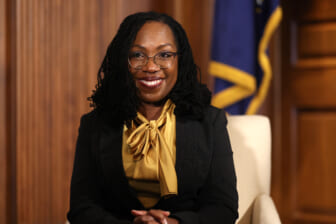 Echoing the words of President Joe Biden’s remarks about Judge Jackson during his State of the Union address on Tuesday, the Senator of New York praised her “great legal mind” and described her as both “brilliant and beloved,” adjectives he also used to describe her on the U.S. Senate floor on Monday.

“After meeting her, I added another word,” Schumer added, “She belongs. She belongs on the court. Plain and simple. She’s fabulous.”

Though Democrats almost certainly have the 50 votes needed to confirm Jackson to the High Court, Schumer told theGrio that Democrats are not “resting on any laurels” and doing whatever is necessary to confirm her, adding “I’d like her to be confirmed by as large a margin as possible.”

The Senate leader said he’d also like to safeguard Jackson against baseless attacks on her legal record or reputation.

“There will be powerful forces arrayed against her. They haven’t been nasty and personal at this point, but…they’re always out there,” said Schumer. “There is a dark money message machine that’s out there from the hard right. They don’t want any judge who is at all not going along with their extreme point of view, and they put all these ads out.”

On Wednesday night during his prime time program, Fox News host Tucker Carlson caused an uproar after he demanded that President Biden publicly present Judge Jackson’s LSAT score to prove the Harvard Law School graduate is a “once in a lifetime legal talent” before “giving her a lifetime appointment.” 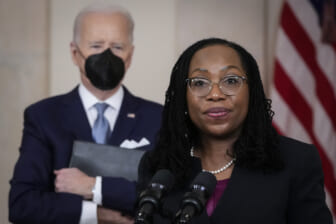 Senator Schumer said it’s important to rally allies for Judge Jackson’s candidacy against any political attacks, but ultimately he said “who she is” will more than certainly get votes in the affirmative — including from Republican members.

“She’s the number one selling point, and as I mentioned, when people meet her, they’re just going to be wowed as I was,” he told theGrio.

In the event that Republican senators decide not to support Jackson’s nomination, Schumer said he wants to ensure that Democrats have the votes they need to confirm her. And given the Democratic Party’s slim majority in the Senate, he wants to put the confirmation process on the fast track.

“One of the reasons we have to move quickly is, you know, with 50 votes, if one person’s absent, we don’t have a majority…someone gets ill [or] God forbid someone passes away,” noted Schumer.

So far, there are no indications that anything or anyone will stand in the way of Judge Jackson being confirmed as the nation’s first African American woman to sit on the Supreme Court of the United States. Schumer said this historic moment can’t be understated.

“It’s an amazing thing to have a Black woman on the court..We’ve had 115 Supreme Court justices, only five have been women, only two have been African-American. None has been an African-American woman,” said the senator. “So this is a giant step in achieving a more perfect union to have the courts mirror what America likes more than they have been in the past.”