In his song "Thank You God," the former "Empire" star defends his innocence while on pre-trial release pending appeal of his high-profile hoax case.

Nearly a month removed from Jussie Smollett’s pre-trial release from Cook County Jail ​​pending appeal of his conviction for staging a hate crime in 2019, the former Empire actor is using rhythm and poetry to express his qualms with the high-profile case.

As reported by TMZ, Smollett on Friday uploaded a link to his new single, “Thank You God” on Instagram with a lyric video of the approximately minute-and-a-half-long rap, in which he laments what he feels are the injustices of his ongoing case.

“It’s like they’re hell-bent on not solving the crime / Taking out the elements of race and trans and homophobia that’s straight taking lives / But turn around and act like I’m the one that killed the strides,” Smollett, 39, raps over a slow, R&B-style beat.

He then appears to push back against notions that he would sacrifice his career by orchestrating and lying about two masked men yelling racist and homophobic remarks, pouring bleach on him and tying a noose around his neck, as he was convicted of in December 2021.

“I can’t be mad / Take my ego out / Some people searching for fame / Some people chasing that clout / Just remember this, this ain’t that situation / You think I’m stupid enough to kill my reputation?” he raps. 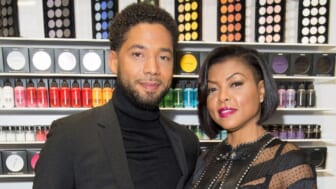 “Just simply to look like a victim like it’s something fun / Y’all better look at someone else, you got the wrong one.” Smollett continues. “All I ever wanted to do was make my people proud / Fame is nothing real, it’s how you make them feel / Celebrity is for the birds, I ain’t no man of steel.”

Smollett said in his Instagram post that he is donating 100% of the song’s profits Rainbow Push Coalition, Secure The Bag Safety and the Illinois Innocence Project.

The outlet reported that Smollett has been penning the song dedicated to “the people who kept it real, who kept it true” in the three-and-a-half weeks since he was released from jail. He was released following a six-day stay after his lawyers claimed in court filings that jail time could be detrimental to his mental and physical health.

Smollett remains free on $150,000 bond as his attorneys argue to a higher court that his conviction, which landed him a sentence of 30 months felony probation and 150 days in jail, should be overturned.

According to Deadline, his sentence began March 10, and he was additionally ordered to pay a $120,106 restitution fee and $25,000 fine to the City of Chicago.