The popular Starz series returns after an acclaimed first season

The wait is almost over, P-Valley fans! The popular Starz series is officially coming back for a second season, and the show just dropped the trailer ahead of its June 3 premiere date.

Based on creator Katori Hall’s play P—y Valley, the series tracks the goings-on at The Pynk, a popular strip club in the Mississippi Delta. Season 1, which aired in summer 2020, earned plenty of praise along with NAACP Image Award and GLAAD Media Award nominations.

Now, the series is reuniting fans with The Pynk, the fan-favorites, and more. 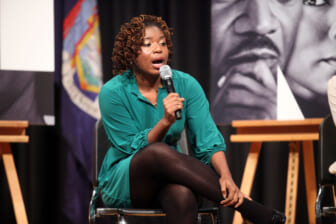 The trailer uses “Who’s Got the Boom” by Sophia Eris to tease scenes from the new season. At the beginning of the teaser, you hear Morocco Omari’s character Big L say, “Oh, y’all had thought The Pynk had done her last dance. But this a whole new day, a whole new Pynk.”

“When darkness descends upon Chucalissa, everybody and they mama must fight tooth and talon to survive. While some take flight to perilous new heights, others dig in their stilettos and stand their ground no matter the cost,” season 2’s official synopsis reads.

“Back at the Pynk, Autumn and Uncle Clifford grapple for the throne as new blood shakes up the locker room. Meanwhile, with the casino’s fate hanging in the balance, the local political machine kicks into overdrive. In these unprecedented times, death, and danger lurk around every corner.”

In June of 2020, theGrio’s Mariel Turner sat down with Hall to discuss P-Valley, and the importance of the LGBTQ+ representation it provides. “When it came to representing the LGBTQIA community, it was just a part of my mission statement. I believe that all Black lives matter,” she explained to us.

P-Valley returns to Starz on June 3.