OPINION: In another episode that departs from the world of the main characters, the show explore white parents struggling to interact in the world of a Trinidadian nanny who's like a second mother to their son. 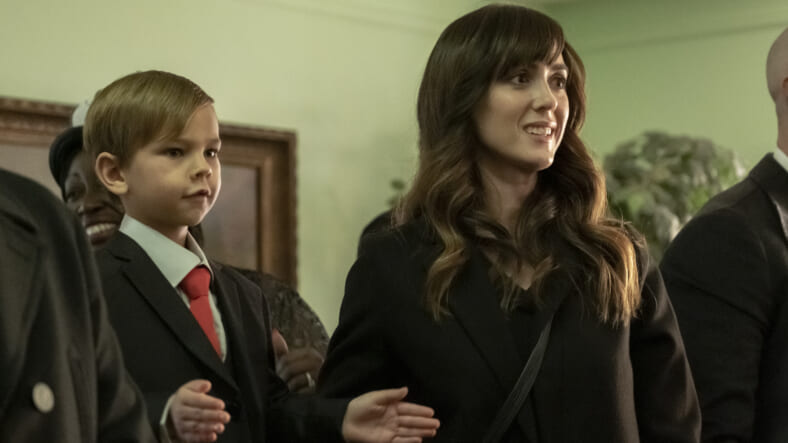 During the day on the streets of New York City, you’ll see a lot of middle-aged Black women from the islands playing with young white babies. You’ll hear their accents and see their conservative maternal outfits as well as their love for the children and the ease with which they manage them. They always seem to have it all under control. There’s a whole network of island women in the city who help each other find long-term babysitting jobs. These women are often like second mothers to the children they’re paid to watch, but what impact are they having on the kids, and if they’re spending their days raising another’s family children, what’s the impact on their own kids?

Atlanta’s episode “Trini 2 De Bone” explores the relationship between a longtime caregiver and the family that’s relied on her for years. This episode, directed by Donald Glover, explores this relationship right after the caregiver, Sylvia, has died, and it’s fascinating that the show takes on this issue by giving so much life and so much space and so much power to a character who’s passed away. There’s deep symbolism in the fact that even though she’s dead, she’s still a big part of their lives.

This is the third episode this season that has departed from the world of the four main characters to explore white people struggling as they interact with Black people. In “Trini,” we have an upper-middle-class white family in New York City attending a Black funeral and finding themselves in a foreign world. It really feels like they’ve entered a different country. Well, not entirely—while the parents seem lost in this Trini space, their kindergarten-age son, Sebastian—or Bash—feels totally comfortable. We see this from the beginning when he declines to eat a piece of bread until dad puts spicy curry mango sauce on it. He clearly learned about this sauce from his nanny, and while he eats it with no trouble, the dad struggles to get even a bit of it down his throat because it’s far too spicy for him. It’s a great little symbol of how the boy is accustomed to Trini culture while his parents have a hard time with it.

We see this dichotomy again when the family arrives at the funeral. A Black man outside the event calls the family “cockroach,” obviously a condescending insult, but the young son knows the Trini phrase “Cockroach has no place at fowl party,” which means “Don’t go where you don’t belong.” Roaches shouldn’t go to a party full of chickens. In this case, it would mean, “You white people should go home.” But, the boy has imbibed enough Trini culture that he knows this little phrase’s meaning, and he’s not quite an outsider after all. The show repeatedly signals in subtle ways that he’s comfortable in this Trini cultural space while his parents are lost in it. Doing this subtly is such great writing.

At the funeral, we get a peek at the man Sebastian could grow up to become—Curtis, a young white man from Tribeca who’s got an accent like he’s fresh off the plane from Trinidad because Sylvia was his sitter. Her impact on the children she cares for runs deep because she’s like a real mother to them. I kept saying, throughout this episode, that Bash’s mother, Bronwyn, doesn’t really seem like a mother to me. She seems distant, like a stepmother. And in the episode’s final moment, the dad finally receives his son’s photo from the school’s family picture day—this is the package that’s been stalking him throughout the episode—a package he tried to reject, but it wouldn’t go away. It’s a photo of the sitter and his son, sitting together like they’re mother and son. In the final photo, she seems to be making a face that’s kinda mocking, kinda taunting, kinda saying he’s really my kid. I’m his true family. I mean, his real parents didn’t show up for family day, didn’t know how to get him to eat and didn’t know how to properly rub his back when he was stressed. The nanny knew how to make him feel at home, and now he feels at home in her culture.

So in this universe, the Black folks know all about the white people’s world—the white family is known to many of the people at the funeral—but the white adults know nothing of the Black woman’s world. Typical. As the episode moves on, we, and they, learn more and more about the deceased sitter. She was a mother. She was a dancer. She was an immigrant who was devoted to her family in Trinidad. We learn more and more about the real person, and then we learn a lot when her bitter daughter, Princess, rushes to the stage and grabs the mic. She’s the answer to the question: What’s happening to the sitter’s kids while the sitter is with your kids? Princess’s anger is palpable as she interrupts the service to yell at her mother one last time for abandoning them—she wasn’t there when her son got jumped or the apartment was broken into. She was providing, but she wasn’t protecting and raising her family the way she was protecting and raising other families. She wasn’t always mothering her own. “I needed you!” Princess shouts. “Where were you?” It’s powerful and heartbreaking. Her family suffered as she was the glue for other families.

Stray thoughts: When the dad parks, behind him on the wall is a poster advertising Paper Boi’s return home concert, so Paper Boi still exists in this world. He’s just off in Europe. It’s so interesting to me that they’ve given us a season about the gang’s trip to Europe that’s intercut with stories about random characters in America. I can’t ever recall a show telling so many narratives from outside the world of the main characters. It’s another example of Atlanta breaking the rules, or the norms, of TV with impunity and getting away with it because they’re so good and because the audience loves them so much that we’ll follow them anywhere.