In a recent appearance on "The Howard Stern Show," Carmichael admitted that his revelation has put a strain on their relationship.

In his searing new HBO comedy special, Rothaniel, Jerrod Carmichael comes out as gay and talks about how the news has shaken up his family dynamics.

In a recent appearance on The Howard Stern Show, Carmichael explained further how that revelation has put a strain on his relationship with his mother, reported People on the interview.

“Me and my mom have a God-sized wall between us. You know, that’s the impossible thing to navigate,” he said Wednesday, speaking of his mother’s deep roots in Christianity. The 35-year-old comic admitted that the faith caused him to feel “self-hate” and stay in the closet longer, noting, “That’s what was really destructive, and it’s been very, very difficult.”

The former Carmichael Show star said he was “trying to trust fall into a new interpretation of religion because I do think it has value.”

“Like, I haven’t completely let go of it, and I’m trying to reinterpret it for me,” he told Stern, “and I’ve been trying to get my mother to have some type of openness to her interpretation of it, and it’s hard. It’s a tricky thing because people — my mother, not just people. My mother holds onto religion because it got her through really rough times.”

Those times, Carmichael says, include growing up in housing projects, where she “needed God for every step of her life.”

“She didn’t account for a gay son. She doesn’t really know what to do with it,” he added. “I can feel her being lost. I want to work with her, but talking to her and not acknowledging that part of myself causes a reverberating effect of self-hate that I can’t afford right now. So, I added distance. I think it’s important.” 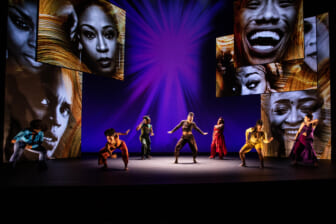 Sadly, the comic shared that he and his mother speak less frequently than they did before he came out. He doesn’t want their conversations to be “fake,” Carmichael said, noting that even in his professional life, he wants to “just be truthful.”

Carmichael recounted a story about an interaction with his father, who has served as a go-between for the funnyman and his mom.

“Your mom called the other day, so take some time to call her. She loves you and misses her baby boy,'” Carmichael recalled. “What I wrote back was, ‘I know. I love her too, but her baby boy is now a big gay man, and I think we need some time to come to terms with that.’ And that’s where we are.”