The former Biden-Harris official talks about leaving the White House and what viewers can expect from "Symone," premiering May 7 at 4 p.m. ET.

Symone Sanders is no stranger to cable news television. As a former national press secretary for U.S. Sen. Bernie Sanders’ presidential campaign and later a TV political analyst, Sanders has been a regular on political news programs over the years.

Known for her sharp, political analysis and her unapologetically Black style of commentary — and fashion — the 32-year-old established herself as a young, formidable and unique voice in politics.

Now, after lending her talent and expertise to Joe Biden’s 2020 presidential campaign and the office of Vice President Kamala Harris, Sanders has returned to cable news television. This time as the host of her own MSNBC show, eponymously titled, Symone. The show will also be available for streaming on Peacock. 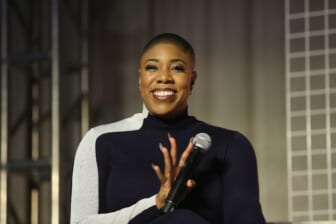 During a sit-down interview with theGrio in between rehearsals for her show’s May 7 premiere, Sanders is animated and full of excitement. Far from what you’d expect from someone who’s been putting in hours of work learning how to read a teleprompter, developing her hosting style and studying veteran anchors — with the sound off, as she told theGrio.

“You can see the kind of host that you would like to be [and] you notice things when the sound is off,” Sanders said of the host-in-training hack she learned from a colleague.

While the Omaha, Nebraska native may not be new to the TV business, being a host was a different territory to navigate. However, Sanders said, “it was a challenge [she] was excited to take on.”

“I’m chomping at the bit for you all to see what we have put together and cooked up,” she said.

The premiere of Symone will kick off with a high-profile guest — the first lady of the United States, Dr. Jill Biden. The first lady will “discuss humanitarian efforts and her plans to meet with refugees and Ukrainian mothers in the region on Mother’s Day,” the network announced on Wednesday. While Dr. Biden has rarely given interviews as first lady, Sanders’ former high-powered job in the White House gives her access she can leverage to her advantage.

When Sanders decided to part ways from the White House, where she served as senior advisor and chief spokesperson for the vice president, it became headline news. She was one of a handful of Black senior officials in the Biden-Harris administration.

Sanders told theGrio that while leaving her White House job was not an easy decision, it was one she felt was necessary after growing “tired” of the hustle and bustle of government and campaign work over the years.

Sanders said she also needed time to plan her wedding and enjoy time with her “amazing” fiancé, Shawn Townsend. “I wanted to be able to enjoy being engaged. I wanted to really be able to focus on walking into a marriage,” she shared. 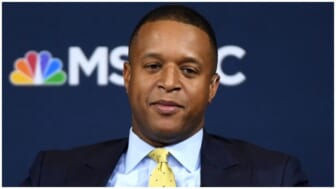 Also Read:
Craig Melvin fights back tears as he signs off in final MSNBC broadcast

Now that she’s had some time to recharge, Sanders said she looks forward to facilitating important political conversations, particularly as it relates to this year’s midterm elections. “There’s all this talk about the midterm elections as though they’re all happening in November, but there are primaries happening right now,” said Sanders, who couldn’t help herself when discussing the state of the country and the importance of voting.

“I believe that we are at an inflection point in America,” she said, adding, “Our democracy is hanging on by a thread.”

“Politics and culture are all swimming in the same stream, as I like to say,” declared Sanders. “Culture is shaping what the people in Washington, D.C. are doing every day…we hear a lot about the culture wars, and some people say they’re a distraction. Culture wars are not the distraction. They are the playbook for some of the people out there.”

It’s also not lost on Sanders that she is amongst a growing crop of Black women anchors facilitating political and cultural conversations, including those on NBC News and MSNBC like Joy Reid, Tiffany Cross, and veteran White House correspondent Kristen Welker.

“I think this moment comes with an enormous amount of responsibility. I am very honored to join the ranks of hosts and anchors and a number of Black women who are lending their voices to creating conversations,” said Sanders.

Most importantly, she said, she wants to show young people that an anchor can “come in different shapes and sizes.”

Sanders said she intentionally shows up in every space as her authentic self, noting, “how I talked to the president and vice president is how I spoke on the campaign trail [and] is how I talk to my friends.”

Sanders said she wants to be that same “Symone” when MSNBC viewers tune in for her new show. “I am a bald, curvy, Black girl from North Omaha, Nebraska — and my voice matters too,” she expressed.

“When people turn on that TV, I hope that they see themselves. I look like this intentionally because this is my authentic self, and I want people to know that your authentic self is just enough.”

Symone airs weekends on MSNBC at 4 p.m. ET with new episodes streaming on the MSNBC hub on Peacock on Mondays and Tuesdays.