The Chicago Sky star is only the third WNBA player to post multiple triple-doubles; she was with the Los Angeles Sparks when she scored her first one in 2017.

Chicago Sky star Candace Parker made history as the third WNBA player to record multiple triple-doubles in a career — and, at 36, she is also the oldest to do it.

As reported by Yahoo, Parker led the Sky to an 82-73 win over the Washington Mystics on Sunday, during which she scored the second triple-double of her career. Her triple-double is reportedly the 12th in WNBA history.

Parker finished Sunday’s game with 16 points, 13 rebounds and 10 assists, in its last seconds completing her triple-double by assisting point guard Courtney Vandersloot. Last year, during the playoffs, Vandersloot joined Sheryl Swoopes as the only other player in the history of the WNBA with more than one triple-double.

“It means a lot,” Parker said in a post-game interview, ESPN reported. “To be in the company with Sloot, who does it on a regular basis and will end up leading the league in assists. And Sheryl Swoopes, I grew up watching her play and idolizing her. To be in that company. I realize there are more that are coming behind me. Hoping coaches are watching post players, point forwards, that’s where it’s at.”

Parker was playing with the Los Angeles Sparks when she scored her first triple-double in 2017, according to the report.

She reportedly considered retiring after the Chicago Sky won the WNBA championship last fall. At the time, her wife, Anya Petrakova Parker, was pregnant with their first child together, and Parker contemplated leaving the spotlight for family life. In December, she took to social media to celebrate their second wedding anniversary and announced Anya’s pregnancy.

For many fans, news of Parker’s same-sex marriage was a shock. The anniversary post marked their public coming out as a couple.

“ I just never felt like you should have to come out,” Parker said in an interview with ESPN.

“I feel like everybody that knew me, knew her and the people that didn’t, don’t really know us,” she said. “I don’t remember telling many people, ‘I have a girlfriend.’ It was just like, ‘Hey, this is Anya’ and people would eventually figure it out.”

When Anya became pregnant, Parker had a change of heart about coming out publicly. But her Russian-born wife was especially worried about how their marriage would be received in her native country. 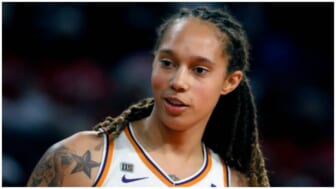 “I was nervous, to be honest,” Petrakova Parker admitted. “I didn’t know if there would be any government repercussions or my Instagram would get shut down. [LGBTQ+ rights are] a very uneasy subject in Russia. So I wanted to wait until I got my green card.”

As it turned out, she did not experience much backlash, even from her Soviet sisters and brothers.

“A lot of my friends DM me and tell me they’re so proud of me and I’m so brave,” she said. “They’d be scared to death, but now they’re more brave because of me.”