OPINION: America is being held hostage by a white minority that believes their so-called “freedoms” outweigh the value of everyone else’s lives. 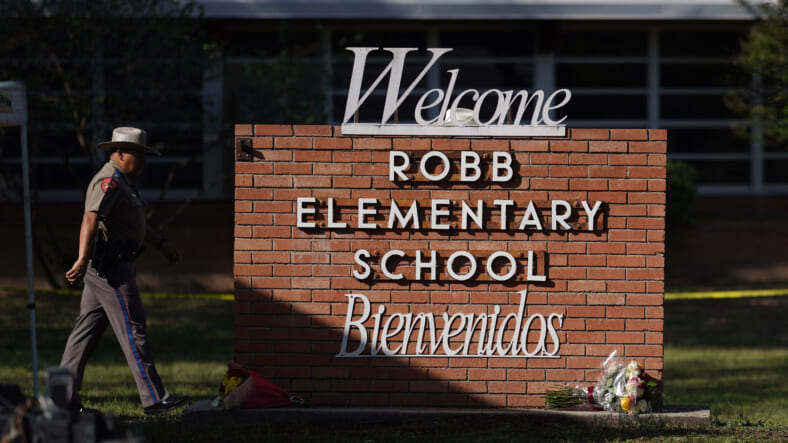 An officer walks outside of Robb Elementary School in Uvalde, Texas, on May 25, 2022. (Photo by ALLISON DINNER/AFP via Getty Images)

Among the many misconceptions about white identity politics is the tendency to believe that truth, reason or—at the very least—human decency can bring about change. In the 402 years since European colonizers first began outlining the political and legal parameters of this Caucasian utopian experiment in democracy, too many people (myself included) have tried to dismantle the absurdity of white supremacy with facts, logic and reason. 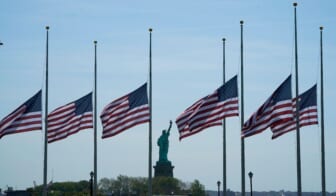 I have personally whittled my fingers to the bone trying to make it all make sense. In an attempt to counterbalance the narrative against critical race theory, I have foolishly used the actual definition of CRT. When someone asks, “But what about Black-on-Black crime?” I’ve pulled out statistics, census data and peer-reviewed sociology studies. I stupidly assumed that white people would stop saying “all lives matter” once they understood the disparities in policing, sentencing and the entire criminal justice system.

So when I heard reports that a gunman walked into a Uvalde, Texas, school and opened fire on dozens of elementary school children, I knew that people who believe in things would immediately begin ranting about firearm manufacturers, the National Rifle Association and the Republican Party. Even worse, I knew that the alphabet soup of death dealers that includes the NRA, the GOP and Y.P. Pull would start spewing nonsense about arming teachers, Second Amendment rights and jack-booted thugs coming to confiscate their guns and their freedoms. While I could have easily written about this, I have written those pieces time and time and time and time again.

While that might seem like the perfect example of reverse racism, we have already established that logic doesn’t matter. We know that states with strong firearm laws experience fewer gun-related deaths. Anyone can use a secret tool called the internet and find out that good guys with guns don’t stop bad guys with guns. Everyone understands that the NRA is funded by, and represents, the interests of gun manufacturers, not regular gun owners. A person with a limited IQ could guess that guns are the most common tool of murderers in America. In fact, most Americans favor common sense gun reform, so the problem is not that people don’t know the facts.

The problem is white people.

It’s not Republicans—most Republicans support background checks and restricting access to guns for people with mental illness. It’s not the NRA—most gun owners don’t belong to the NRA. It’s not the Second Amendment—no serious politician has proposed doing away with all guns. The reason every third-grader in America has to remember what to do when an actual monster comes to kill them is that, unlike the vast majority of every other racial and demographic in America, most white people don’t want stricter gun laws.

And, before you wonder why I think white people don’t care about children being murdered, that’s not what I’m saying. In fact, it’s quite the opposite. I think white people don’t want children being murdered, and they oppose restrictions on gun ownership. But, if they have to choose, instead of concluding that they will still be able to purchase a gun if they pass background checks, don’t have mental health issues and can endure an agonizing waiting period, they choose the warm comfort of whiteness. For them, their supposed “freedoms” are more important than the lives of everyone else.

They don’t want the coronavirus killing their children, but they support anti-mask, anti-vaccine candidates. They believe that every vote should be counted, but they support laws that suppress Black voters. They believe in freedom of speech and religion, but they also want to ban Muslims, mute gays and demean anyone who doesn’t believe in white Jesus. And, in many cases, they will tell you that they don’t hate trans people, Black people or non-Christians. But, when they have to decide between their privilege and other people’s existence, they will always always always choose whiteness over everything. 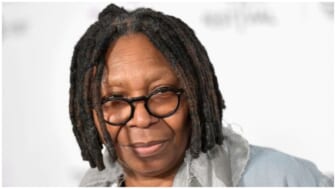 This is why I have stopped arguing with white people. I don’t expect them to understand truth or reason. They will argue against government interference while asking their government to regulate vaginas. They’ll rail against identity politics while demonizing immigrants, Muslims and the “gay agenda.” They will manufacture a way to circumvent history, math and science to come up with an opinion that supports whiteness because the literal foundation of this country was built on one inexorable truth.

Nothing matters but whiteness. Everything else can die.

You can’t argue with that logic.