Karen Bass on primary election run for LA mayor: ‘When home is on fire, you go home’

The California congresswoman, in a sit-down interview with theGrio, discusses colliding crises in Los Angeles: homelessness, crime and the economy.

On Monday, a day before the June 7 primary vote in California, U.S. Rep. Karen Bass (D-Calif.) met with constituents of Los Angeles in various cafes and restaurants in her final mayoral stump before voters cast their ballots in Tuesday’s election.

Bass, if victorious in the general election, would become LA’s first woman (and Black woman) mayor in its 172-year history. In an interview with theGrio, Bass said her top policy agendas will be the fight against homelessness and crime.

While one may wonder why a veteran member of Congress would leave Capitol Hill to run for mayor, Bass ultimately heeded calls from Los Angeles residents for her to jump into the primary race. “When home is on fire, you go home to put it out,” Bass told theGrio, adding, “LA is really in the midst of a very, very serious crisis.”

The former chairwoman of the Congressional Black Caucus likens the state of LA to the unrest seen 30 years ago after the brutal police assault of Rodney King. ”We have spent several decades moving LA in a very liberal, progressive direction, and I don’t want to see that reversed,” said Bass. 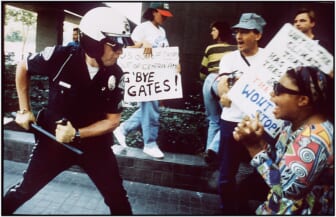 However, before she can take the reigns of city hall, Bass will have to defeat her billionaire opponent, former Republican turned independent and eventual Democrat, real estate developer Rick Caruso.

While Bass maintained a competitive edge, polls showed that Caruso overcoming the Democratic stalwart is a very real possibility. The 68-year-old lawmaker argued in her sitdown with the theGrio that Caruso’s performance in polls is a result of him spending his own fortune in their primary contest.

Bass’ potential departure from Washington, D.C. will be a significant transition and would be felt throughout the halls of Congress, as she has been a crucial broker in helping push forward the Democratic Party’s legislative priorities.

However, her involvement in leading bipartisan negotiations on a police reform bill – the George Floyd Justice in Policing Act named in honor of the unarmed Black man murdered by Minneapolis police – notably ended in failure. Bass told theGrio that the Floyd bill ultimately tanked in Congress after Republican Sen. Tim Scott of South Carolina essentially backed out of negotiations. 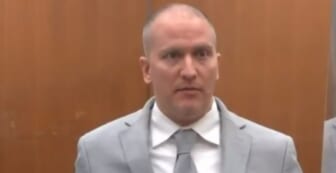 The former activist recalled other efforts she led on the Hill like introducing a comprehensive bill that would reform the way women are treated in the criminal justice system and a range of policies in support of Africa as chair of the House Subcommittee on Africa, Global Health, and Global Human Rights.

The national focus has now turned to more state and local challenges across the country in the cities that have seen a spike in crime and homelessness – including Los Angeles. Bass believes her political experience and history of activism can turn things around in the City of Angels. On the issue of the unhoused, she said she worried about the current state of the city.

“Well, it used to be Skid Row. It’s not Skid Row anymore. It’s all over the city,” Bass acknowledged. “You can’t go under most freeways…and not see small communities of people living outside.”

She added that “the part that breaks my heart” is the fact that while Black people make up only 9 percent of the Los Angeles population, they make up a disproportionate number of the city’s homeless population at 40 percent. When you include the Latino community, Bass pointed out that 70 percent of those experiencing homelessness are Black and Brown.

Another economic issue of concern is inflation, which is creating havoc around the country – and especially in Los Angeles where prices for goods and services are at some of the highest in any city. For example, gas at the pump topped $6 in the state of California, according to data from Triple A. 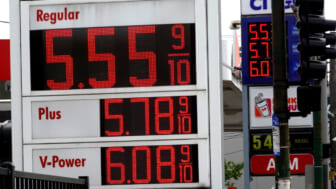 “Gas prices are a very big issue as we are a very car-dependent city,” said Bass. But she noted that the rising prices at the bump reflect a larger economic issue in LA, which is income inequality.

“LA has become so expensive to live in that a lot of people have to live in outlying cities,” she lamented. What’s more, Bass said the median price for a house in the city is well over $700,000.

The mayoral hopeful sees the issues of homelessness, inflation and income inequality as “interconnected,” saying, “affordability really is at the root of it.”

Crime is also plaguing Los Angeles, where reports revealed a rash of smash-and-grab robberies at stores and the wealthy being targeted in neighborhood crimes.

“Many of those neighborhoods have not experienced crime before in this manner,” said Bass. “A lot of very liberal areas that were waving Black Lives Matter flags a couple of years ago are going, I don’t know, you guys are kind of scaring me now.”

But whether crime, homelessness, or inflation, Bass told theGrio that what is happening in LA is a “bellwether for what is going to happen around the country.” However, she did express fears that renewed urgency to address crime in American cities like LA could have negative consequences in the efforts to reform the criminal justice system and policing in America.

“We can’t just sit back and assume that the policy changes that we’ve won are settled. If Trump taught us anything, nothing is subtle. You have to keep up the fight.”