A look at high-profile killings by US police

From Eric Garner to Amir Locke, a review of police killings dating back to 2014

A Michigan police officer has been charged with second-degree murder for fatally shooting Patrick Lyoya in the back of the head as the Black man was on the ground.

The charges against Grand Rapids Officer Christopher Schurr come roughly two months after Lyoya was killed on April 4 during an intense physical struggle, which was captured on bystander video. Schurr fired the fatal shot while demanding that Lyoya, a refugee from Congo “let go” of the officer’s Taser.

Kent County prosecutor Chris Becker said Lyoya’s death was not justified and could not be excused as self-defense. Schurr, who is white, told Lyoya that he stopped his car because the license plate didn’t match the vehicle. Roughly a minute into the stop, Lyoya began to run after he was asked to produce a driver’s license.

Officers are rarely charged with crimes in civilian deaths, and it’s even rarer for them to be convicted. Still, some recent high-profile cases have ended with guilty verdicts. 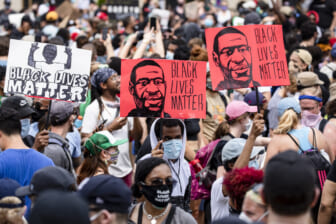 Here’s a look at the outcomes of some high-profile killings by police:

Garner, a 43-year-old Black man, died in July 2014 in New York City after a white officer placed him in a chokehold when he refused to be handcuffed for allegedly selling loose, untaxed cigarettes. A Staten Island grand jury declined to indict Officer Daniel Pantaleo. The Justice Department declined to file civil rights charges.

Brown, a Black 18-year-old, was fatally shot by a white officer, Darren Wilson, in 2014 in Ferguson, Missouri, sparking weeks of sometimes violent protests. A St. Louis County grand jury, the U.S. Department of Justice and the St. Louis County prosecuting attorney all declined to charge Wilson in Brown’s death.

Chicago police Officer Jason Van Dyke shot McDonald 16 times, killing the Black 17-year-old in October 2014. Van Dyke was found guilty of second-degree murder in 2018. He served less than half of his almost seven-year sentence before being released in February.

Tamir Rice, 12, was fatally shot by a white Cleveland police officer in November 2014. Tamir, who was Black, had a pellet gun tucked in his waistband. A grand jury declined to indict patrolman Timothy Loehmann, who fired the fatal shot, or training officer Frank Garmback. The Justice Department declined to bring federal charges.

Michael Slager, a white South Carolina police officer, shot Scott in the back as the 50-year-old Black man fled a 2015 traffic stop. After a jury couldn’t agree to a verdict on state murder charges against Slager, he pleaded guilty to violating Scott’s federal civil rights and was sentenced to 20 years in prison. Prosecutors dropped the state charge.

Gray, a 25-year-old Black man, died in 2015 after he suffered a spinal injury while handcuffed and shackled in a Baltimore police van. Six officers were charged. Three were acquitted and Baltimore’s state attorney dropped the other cases. The Justice Department declined to bring federal charges.

Castile, a 32-year-old school cafeteria worker, was fatally shot by a Minnesota police officer during a 2016 traffic stop after Castile informed the officer he was armed. Officer Jeronimo Yanez testified that Castile was pulling his gun out of his pocket and was acquitted of manslaughter.

Justine Ruszczyk Damond, an unarmed white dual citizen of the U.S. and Australia, was fatally shot in 2017 by Minneapolis Officer Mohamed Noor after she called 911 to report a possible rape. Noor testified he was startled by a loud bang and that he fired to protect his partner. He was convicted of third-degree murder and second-degree manslaughter and sentenced to 12 1/2 years. The murder conviction was later overturned and Noor was resentenced on the manslaughter count to nearly five years in prison.

Roy Oliver, a white Texas police officer, fired at a car full of teenagers as it drove away from a house party in 2017, fatally shooting the 15-year-old Edwards, who was Black. Police initially said the vehicle backed up aggressively toward officers, but video showed the car was driving forward as officers approached. Oliver was convicted of murder and sentenced to 15 years in prison.

Ellis, a 33-year-old Black man, died in March 2020 after he was Tasered, handcuffed and hogtied, with his face covered by a spit hood during an arrest in Washington. Tacoma police officers Christopher Burbank and Matthew Collins have pleaded not guilty to second-degree murder charges. Officer Timothy Rankine has pleaded not guilty to first-degree manslaughter.

Taylor, a Black 26-year-old Louisville emergency medical worker, was fatally shot in her apartment during a raid by plainclothes narcotics detectives in March 2020. A grand jury brought no charges against officers in her death and prosecutors said two officers who fired at her were justified because her boyfriend shot at them. However, one officer was indicted for shooting into a neighboring home.

In May 2020, the dying gasps of Floyd under the knee of a Minneapolis police officer led to the biggest outcry against racial injustice in the U.S. in generations. White former Officer Derek Chauvin was convicted of second-degree unintentional murder, third-degree murder and second-degree manslaughter and sentenced to 22 1/2 years in prison. He also pleaded guilty to a federal count of violating Floyd’s rights. Three other officers — Tou Thao, Thomas Lane and J. Alexander Kueng — were convicted of federal civil rights violations. Lane also pleaded guilty to a state charge of aiding and abetting second-degree manslaughter, while the two others face state trial in January. 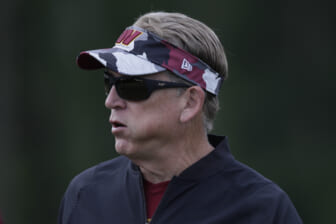 In April 2021, a police officer in the Minneapolis suburb of Brooklyn Center said she mistook her handgun for her Taser when she fatally shot Wright, a 20-year-old Black man, during a traffic stop. Former Officer Kim Potter, who is white, was convicted of both first- and second-degree manslaughter. Citing mitigating factors, a judge sentenced Potter to two years, well below the presumptive sentence of just over seven years she faced under state guidelines.

Brooks, a 27-year-old Black man, fell asleep in his car in an Atlanta restaurant drive-thru lane in June 2020. Two white officers told him he was too drunk to drive and tried to arrest him. Brooks grabbed one of their Tasers and fired it at Officer Garrett Rolfe. Rolfe fired his gun, hitting Brooks twice in the back. Rolfe is charged with murder. Officer Devin Brosnan was charged with aggravated assault and violating his oath.

A white Ohio sheriff’s deputy shot Goodson, a Black 23-year-old, in the back five times in December 2020. Jason Meade pleaded not guilty to murder and reckless homicide. His attorneys argue that, as a member of a U.S. Marshals Service fugitive task force, Meade was acting as a federal agent and want his case moved to federal court.

Hill, a 47-year-old Black man, was fatally shot by a white police officer in Columbus, Ohio, in December as he emerged from a garage holding a cellphone. Officer Adam Coy was fired and has pleaded not guilty to murder and reckless homicide. The police chief was forced out and the city agreed to pay a $10 million settlement to Hill’s family. Coy’s trial is scheduled for March 7.

Greene, a 49-year-old Black motorist, died in Louisiana in May 2019 after what police initially described as a high-speed chase and crash. Long-withheld body-camera video obtained by The Associated Press in May 2021 shows white state troopers jolting Greene with stun guns, punching him in the face and dragging him by ankle shackles. No one has been charged in Greene’s death.

The 22-year-old Grant, who was Black, was killed in 2009 by an officer responding to a fight in Oakland, California. Johannes Mehserle testified at trial that, fearing Grant had a weapon, he reached for his stun gun but mistakenly pulled his handgun instead. Mehserle was convicted of involuntary manslaughter and sentenced to two years in prison. He served 11 months.

Harris, a 44-year-old Black man, was being held down by officers in 2015 in Tulsa, Oklahoma, when a white volunteer sheriff’s deputy fatally shot him. The deputy, Robert Bates, said he had meant to use his stun gun. Bates was convicted of second-degree manslaughter and sentenced to four years in prison. He served about 16 months.

Smith, a 32-year-old Black man, was fatally shot in a Minneapolis parking ramp by members of a U.S. Marshals Service task force in June 2021. Authorities said they were trying to arrest Smith on a weapons violation and that he showed a handgun, and that evidence showed he fired the weapon. A woman with Smith said through attorneys that she never saw a gun on Smith or in his vehicle. No charges were filed.

Locke, 22, was staying on a couch in his cousin’s apartment when authorities entered it in February 2022 without knocking as part of an investigation into a homicide in neighboring St. Paul. Locke was not a suspect in the homicide, but he was shot by a Minneapolis SWAT team officer. Prosecutors declined to file charges, saying Locke, who was Black, pointed his gun at Officer Mark Hanneman, justifying his use of force. Locke’s family has disputed that narrative, saying body camera footage suggests Locke was startled awake and grabbed for a gun he was licensed to carry.