“Words have consequences and his words hurt a lot of people in our community," said Ron Rivera, coach of the Washington Commanders who announced the fine.

Washington Commanders defensive coordinator Jack Del Rio has been fined $100,000 by the team for his comments about protests in the wake of the police killing of George Floyd and the Jan. 6 insurrection at the U.S. Capitol.

Coach Ron Rivera announced the fine in a statement Friday after meeting with Del Rio earlier in the day. He said Del Rio’s statements were hurtful to members of the local community and did not reflect the views of the organization.

Asked Wednesday about a social media post he made earlier in the week, Del Rio downplayed the deadly insurrection and questioned why the protests in the summer of 2020 after Floyd’s death were not receiving the same scrutiny. Del Rio called the Jan. 6, 2021, riot “a dust-up at the Capitol,” which he later apologized for.

“He understands the distinction between the events of that dark day and peaceful protests, which are a hallmark of our democracy,” Rivera said in the statement, adding that Del Rio had a constitutional right to voice his opinion. “Words have consequences and his words hurt a lot of people in our community. I want to make it clear that our organization will not tolerate any equivalency between those who demanded justice in the wake of George Floyd’s murder and the actions of those on Jan. 6 who sought to topple our government.”

Rivera said he feels strongly after their conversation that Del Rio “will have a greater understanding for the impact of his language and the values that our team stands for.” He said the money will be donated to the United States Capitol Police Memorial Fund. 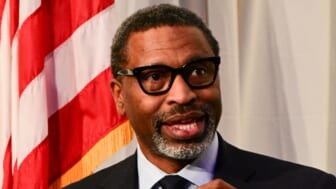 Del Rio, 59, is going into his third season running Washington’s defense on Rivera’s staff and in that time has shared his conservative political views on social media numerous times. A Twitter post Monday night prompted questions to Del Rio after an offseason workout, including whether he was concerned about how his thoughts might go over with players, the majority of whom are Black.

“If they are and they want to talk about it, I’d talk about it with anybody,” Del Rio said. “No problem. At any time. But they’re not. I’m just expressing myself and I think we all as Americans have a right to express ourselves, especially if you’re being respectful. I’m being respectful.”

While the Commanders players asked about Del Rio’s remarks declined comment or brushed off their significance in the locker room, multiple Virginia lawmakers expressed concern about the team’s latest in a long line of offseason issues. On Thursday, Virginia’s legislature abandoned a bill that would have given the NFL club tax incentives to build a stadium in the state. 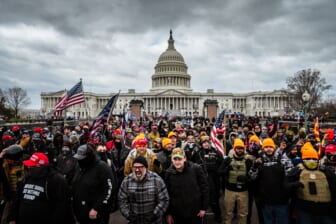 Del Rio’s comments were prompted by preparations for this week’s hearings by a House committee on the Jan. 6 riot. Lawmakers have presented evidence that former president Donald Trump knew he had lost the 2020 election but clung to his claims of election fraud and summoned the violent mob.