Get ready for more Lashana Lynch. The actress who made acclaimed turns in “Captain Marvel” and “No Time to Die” just took on her latest role: Rita Marley in the upcoming Bob Marley biopic.

According to a recent report from Deadline, Lynch is set to portray the legendary singer’s wife in the still-untitled biopic from Paramount. The film, which Reinaldo Marcus Green (“King Richard”) will direct, stars Kingsley Ben-Adir as the reggae singer. A “large net” was cast for the role of Rita Marley. Lynch not only won over executives, but Marley’s family which gave their “blessing to the casting.” 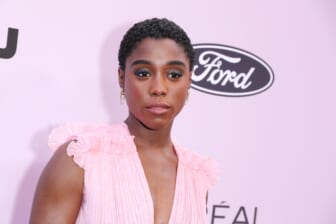 Also Read:
Lashana Lynch on being the first Black woman to play 007 in ‘No Time to Die’: ‘I didn’t want to waste an opportunity’

Rita, Ziggy and Cedella Marley are among the film’s producers. Green and Zach Baylin wrote the script for the film.

The Marley film is one of a number of roles Lynch has lined up. In September, she is set to appear in “The Woman King,” the action movie from Gina Prince-Bythewood. In the “historical epic,” the British actress stars alongside Viola Davis. She will also star as Ms. Honey in Netflix’s upcoming adaptation of the “Matilda” Broadway musical.

As theGrio previously reported, one of Lynch’s biggest roles to date has been that of Nomi, the 007 in the latest James Bond film, “No Time To Die.”

Referring to the role, she told  Harpers Bazaar, “A character that is too slick, a cast-iron figure? That’s completely against what I stand for. I didn’t want to waste an opportunity when it came to what Nomi might represent. I searched for at least one moment in the script where Black audience members would nod their heads, tutting at the reality but glad to see their real life represented. In every project I am part of, no matter the budget or genre, the Black experience that I’m presenting needs to be 100% authentic.”

The Bob Marley biopic is currently set to debut in 2024.