An action-packed thriller starring Jurnee Smollett and Allison Janney is coming to Netflix. The streamer just dropped the first trailer for “Lou,” which sees the two women on a journey to get back Hannah’s (Smollett) daughter after a kidnapping. 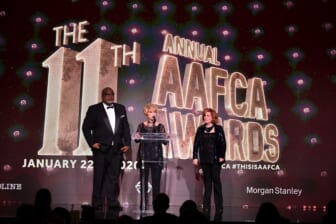 “As a massive storm rages, the two women risk their lives on a rescue mission that will test their limits and expose dark and shocking secrets from their pasts,” the official description from Netflix details. Written by Maggie Cohn and Jack Stanley, and directed by Anna Foerster, the film premieres next month on the streamer.

The trailer wastes no time diving into the action. As the two embark on their journey, it becomes abundantly clear that Lou (Janney) has experience fending for herself, telling Hannah, “If you slow me down, I will leave you behind.”

Smollett took to Instagram with the poster for the film, sharing her excitement for the project and the collaborations it presented for her.

She wrote to her followers, “LOU … we all have a past… we all have secrets. Buckle up because this one is about to be a wild ride.” She continued to detail how this is her first time as executive producer on a project, writing, “Sharing the screen, Executive Producing and kicking ass in the woods with the legend that is @allisonbjanney is truly a dream come true. S/o to @jjabramsofficial, @hminghella and the entire @bad_robot team for making my first time Executive Producing so thrilling.”

“Lou” premieres Sept. 23 on Netflix. Check out the thrilling trailer below: