Sanaa Lathan’s directorial debut, ‘On the Come Up,’ drops trailer

The drama, described as "a love letter to hip-hop," is based on the 2019 young-adult novel of the same name — a New York Times bestseller by Angie Thomas.

Sanaa Lathan’s film, “On the Come Up,” premieres next month on Paramount+, and the official trailer for the film — described as “a love letter to hip-hop” — just dropped.

As theGrio previously reported, Lathan’s directorial debut was first announced in June of last year. The drama is based on the 2019 young-adult novel of the same name — a New York Times bestseller by Angie Thomas. The new film, which stars Jamila C. Gray, Da’Vine Joy Randolph, Lil Yachty and Mike Epps, will premiere at the Toronto International Film Festival before exclusively dropping on Paramount+ next month, per The Wrap.

In “On the Come Up,” Gray stars as 16-year-old Bri, a talented young rapper who thrusts herself into the rap battle scene to help support her family and live up to the legacy of her father, who himself was a local hip-hop legend.

“But when her first hit song goes viral for all the wrong reasons,” details the official synopsis obtained by theGrio, “she finds herself torn between the authenticity that got her this far and the false persona that the industry wants to impose upon her.” 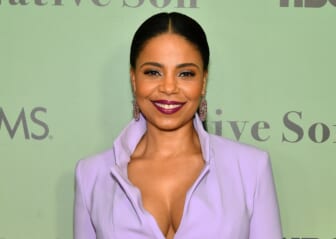 Lathan also appears in the film as Jayda ‘Jay’ Jackson, Bri’s mother. In an emotional scene in the trailer, Jackson encourages her daughter while on her quest to rap stardom. “Just be you,” she tells her. “It’s all the special you need.”

Miles Gutierrez-Riley, Justin Martin, Titus Makin, Michael Cooper Jr., GaTa, and Cliff “Method Man” Smith also star in the film, which was adapted for the screen by Kay Oyegun. Check out the official trailer below.

“On the Come Up” premeries exclusively on Paramount+ Friday, Sept. 23.