Gregg Leakes died in September 2021 at age 66 following a battle with colon cancer.

NeNe Leakes paid tribute to her late husband Gregg Leakes on Sept,. 1, which marked the first anniversary of his death, PEOPLE reports.

The former star of “The Real Housewives of Atlanta” shared a series of videos of Gregg on her Instagram Story, along with the caption: “1 year in Heaven today! We love you and miss you sooooooooo much”.

NeNe also posted several photos of the couple together through the years. She captioned the images, “Memory lane,” according to PEOPLE.

Gregg died on Sept. 1, 2021 at the age of 66 following a battle with colon cancer. As theGrio previously reported, he appeared alongside his wife on 12 seasons of Bravo’s “The Real Housewives of Atlanta.”

“After a long battle with cancer, Gregg Leakes has passed away peacefully in his home surrounded by all of his children, very close loved ones and wife Nene Leakes,” publicist Ernest Dukes said in a statement at the time, The Wrap reported. 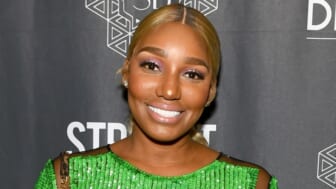 Gregg Leakes was diagnosed with Stage 3 colon cancer in 2018. He then went into remission but last summer NeNe Leakes announced that the cancer had returned. Her husband was hospitalized and needed surgery, theGrio previously reported.

“To learn that Gregg has cancer? Our lives just changed that day,” the reality star told PEOPLE in 2018 after the initial diagnosis. “Our whole routine changed. Just … everything changed. I don’t have cancer. Gregg has cancer. But I feel like our whole house has cancer.”

She added, “He’s a changed person, his attitude changed. I feel like that day I lost my husband. Our whole dynamic changed. Sometimes I forget that he’s sick and I need to remind myself because he’s so on edge. He’s not nice, but he can’t help it.”

“It’s difficult,” she said during an Instagram Live at the time. “He’s super small. If you’ve ever been around somebody who’s had cancer before, he’s different. He’s different.”

NeNe Leakes held a celebration of life event last September at her Linnethia Lounge in Atlanta to honor her late husband. “What a celebration it was!” she wrote on Instagram.

Last month, she took to social media to celebrate what would have been Gregg’s 67th birthday.

“Missing the man that always had a plan!” she wrote on Aug. 16. “Today is a tuff one…every year on this date we would be out celebrating you! …I feel like you went somewhere and you’ll be back.”

She added, “HAPPY BIRTHDAY WE LOVE YOU SO MUCH”.