Wayne Brady, Jordin Sparks, and more to join ‘Dancing with the Stars’

“Dancing with the Stars “is back. That’s right, the popular reality TV competition series is returning for season 31, and a new cast of stars has officially been announced in yet another battle for the coveted mirror ball trophy.

As theGrio previously reported, major changes are happening in the latest season of “Dancing with the Stars.” For starters, after 30 seasons on ABC, the series is officially moving to Disney+, making it the first-ever live series on the streaming service. Additionally, Alfonso Ribeiro will host the show alongside Tyra Banks, who first joined the series in 2020.

This week, fans learned who would compete in the new season as ABC’s flagship morning show, “Good Morning America,” announced a lineup filled with actors, reality TV stars, singers, and more who will appear later this month.

One of the biggest stars joining is actor, comedian and singer Wayne Brady. Brady took to Instagram with excitement after the announcement, sharing a video of him practicing some moves — including Michael Jackson-style body rolls, the running man, robots, and even some of Michael Flatley’s signature Celtic flailing leg “Lord of the Dance” routine.

On “Good Morning America” Thursday, Brady touched on the level of commitment it will take and likened his time on The Great White Way to this experience. “I’ve been on Broadway. I dance in my live show…I sing and dance! Folks forget that sometimes, so I have to do things like this to remind people because it’s in me and what I love to do.” He added, “I’m down for the work. Let’s go!” 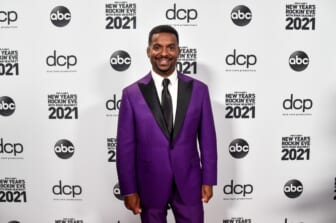 D.J. “Shangela” Pierce of “RuPaul’s Drag Race” fame makes history as the first drag queen to compete for the mirror ball trophy. “Baby, I am a performer, okay,” Shangela told GMA’s Lara Spencer Thursday morning. “I love to hit a stage, but…I’ve never been in a ballroom before in this particular setting. So I just want to show up for the moment, show up for everyone who ever felt like they were on the outskirts, that didn’t feel seen, and baby here we are!”

Platinum recording artist and “American Idol” alum Jordin Sparks also is competing in this year’s show and broke down what will separate her “DWTS” journey from her first experience on reality TV years ago. “I think it does kind of give me a little advantage that I’ve been on a competition reality show already,” she explained. “I know that I can sing. You say sing a song, and I’m like, ‘OK, I’m good.’ But telling me to dance with no singing is a little bit different, so I’m a little nervous about that.”

“Dancing With the Stars” premieres Sept. 19 on Disney+.