The highly anticipated film will premiere in movie theaters this holiday season.

Whitney Houston’s biopic is officially on the way! The highly anticipated film has dropped the first trailer, which gives fans a first glimpse at Naomi Ackie playing, “The Voice.”

As theGrio previously reported, “I Wanna Dance with Somebody” has been in the works for quite some time now. Ackie first nabbed the lead role in 2020. By the looks of the trailer, the film will follow Houston’s meteoric rise to global fame, from legendary music figure Clive Davis discovering her to her iconic performance at the 1991 Super Bowl.

Tucci’s Clive Davis states in the end of the trailer, “I might have just heard the greatest voice of her generation.”

Houston’s estate approved the film, unlike the 2014 Lifetime biopic, “Whitney,” theGrio previously reported. Consequently, producers had access to all of Houston’s greatest hits, including “How Will I Know” and, of course, “I Wanna Dance with Somebody.” Anthony McCarten, who penned the popular Queen biopic, “Bohemian Rhapsody,” also wrote the “I Wanna Dance with Somebody” screenplay. 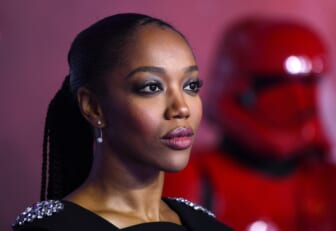 Also Read:
‘I Wanna Dance with Somebody’ official poster released

Ackie recently told PEOPLE about playing Houston in the film, saying that she felt “very nervous” to take on such a monumental role. “She’s been elevated in my life for so long that it felt like an impossible thing to achieve at times.”

“But so many people told me the same thing: If I wasn’t scared and nervous, they’d think something was wrong with me,” she told the outlet. “The biggest challenge was letting my fear of the magnitude of this task take a back seat. Nothing good comes from sitting in fear for too long.”

“I Wanna Dance with Somebody” hits theaters on Dec. 21. Check out the trailer below: