‘The Best Man: The Final Chapters’ trailer is released

The teaser gives fans a first look at the reunion of Morris Chestnut, Taye Diggs, Regina Hall, Sanaa Lathan and the rest of the cast.

First, there was the announcement of the reunion that was over twenty 20 years in the making. Now, the trailer is out for “The Best Man: The Final Chapters.”

As theGrio previously reported, the highly anticipated series was first announced last year. Malcolm D. Lee (1999’s “The Best Man” and 2013’s “The Best Man Holiday”) will also direct the limited series. With the trailer, fans get a true first look at the reunion.

Teasing a “lifetime of friendship,” the series kicks off when Harper (Diggs) gets an exciting opportunity to turn his book, “Unfinished Business,” into a movie. This brings up past issues and feelings in this group of friends. Robyn (Lathan), Jordan (Long), Lance (Chestnut), Quentin (Howard), Shelby (De Sousa), Candace (Hall) and Murch (Perrineau) also appear in the clip, which fuses past footage from the previous films with new scenes from the series.

“None of us are the same people we were 20 years ago,” Murch says in the trailer. According to the official synopsis that theGrio obtained, “the series will catch up with Harper, Robyn, Jordan, Lance, Quentin, Shelby, Candace, and Murch as relationships evolve and past grievances resurface in the unpredictable stages of midlife crisis meets midlife renaissance.” 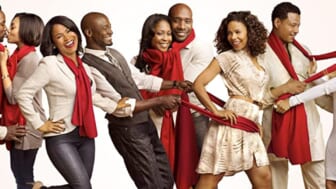 Also Read:
‘The Best Man’ series in development at Peacock with original cast

When the series was announced in early 2021, Lee alluded to the influence of fans on “The Best Man” franchise. “Here we go! The band is back together! I am very excited to bring these iconic characters back to the fans who have supported us through this franchise,” Lee stated.

“We are thrilled to deliver everything one would expect from this group of friends in ‘The Best Man’ universe and take them through their final chapters. We can’t wait! I told you it wouldn’t be 14 more years.”

The Best Man: The Final Chapters will begin streaming Dec. 22, on Peacock. Check out the trailer below: