‘RoeVember’ is yet another reason to get out the vote

Kerry Washington and W. Kamau Bell are among the celebs stressing the importance of voting for 'RoeVember,' a new campaign for women’s reproductive rights.

As a harbinger of the holidays, the month of November marks the beginning of many things, including, this year, the launch of “RoeVember.” This new campaign furthers the alliance between celebrities and social justice issues and organizations; this season, in an effort to showcase the importance of voter participation in a post-Roe v. Wade society.

In case you missed it or have forgotten, in July of this year, the United States Supreme Court overturned the 1973 ruling on the paradigm-shifting Roe v. Wade case. In lifting any federal protection of rights to abortion access, the new decision’s potential harm to women’s rights across the country, especially for Black women, has reemphasized the importance of voting in the midterm election on Tuesday, November 8.

“In your circle of influence, if you can vote, it’s important to vote on a state level and on a national level,” says Kerry Washington. “[Voting] for local representatives, even for school boards [ to decide] what can you talk about and not talk about in school, judges, and sheriffs because living in a state that’s hostile to abortions can come in many forms.”

In tandem with the decision to overturn Roe v. Wade, SCOTUS released several other verdicts jeopardizing women’s reproductive rights, including overturning the Planned Parenthood v. Casey case. That 1992 decision lifted the requirement for written consent from a women’s husband prior to an abortion. It also shifted the timeframe for abortions and allowed states to “regulate abortions before fetal viability as long as a “substantial obstacle” or “undue burden” is not added. Additionally, this year, the Supreme Court ruled in favor of the Mississippi law banning abortions past 15 weeks of pregnancy in the Dobbs v. Jackson Women’s Health Organization case. 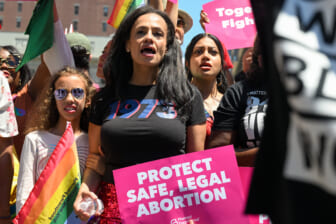 Ultimately, the recent verdicts for all of these cases have implications “beyond abortions,” as Washington stressed in her video. As local government officials express their stances on abortion rights, women’s rights advocates note the impact this decision also has on women’s healthcare, finances, and privacy rights.

“The SCOTUS decision on the Dobbs v. Jackson Women’s Health Organization will have lasting effects not only on our reproductive rights but on many other fundamental rights related to our privacy, bodily autonomy, and individual freedoms,” says influencer and comedian Liza Koshy. “Now to win this battle it’s going to require us to fight on many, many fronts.”

The RoeVember conversations are a crucial part of this fight. As Nancy Northup, president and CEO of the Center for Reproductive Rights highlights in her interview with Washington, talking about these issues is only a primary step. Whether speaking to neighbors, aunties, friends, or colleagues, the fact remains that one in four women will experience an abortion in their lifetime, meaning that even if the issue do not directly impact them, it will likely affect someone they know and love.

“This is an issue of healthcare. Whether you can vote or not, or whether you can afford to write a check or not, you can talk about it in your sphere of influence,” stresses Washington. 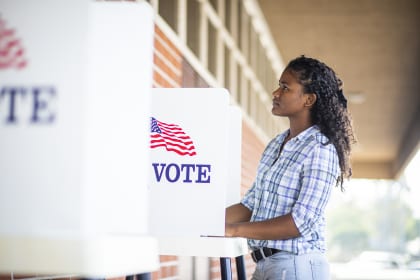 For the Black community, that probability is even higher. According to data from the U.S. Centers for Disease Control and Prevention, Black women in the U.S. received 38% of documented abortions in 2019 and are three times more likely to die from pregnancy-related complications. According to Jocelyn Frye, president of the National Partnership for Women & Families,\ 17 states have already banned abortions, and 26 more are close to banning them, affecting almost 36 million women of reproductive age across the country.

“Now the Dobbs decision has made [access] much worse. Many of the folks who are least able to travel hundreds and hundreds of miles to get access to prenatal care are folks of color, Black and brown folks who need care. And it’s not just about access to abortion; that’s an important piece of it, but if they’re not able to go to a provider, they are not getting prenatal care or meeting with their OBGYN. They’re not getting healthcare which is so essential,” says Frye.

Despite all the discourse surrounding women’s reproductive rights and abortion rights, the majority of Americans support abortion rights. According to Gallup polls, 85% of Americans supported abortions under most circumstances in May 2022. Therefore, as Northrup highlights, it’s not a matter of shifting public opinion but rather making sure the polls represent the public’s view. The only way to do that is for Americans to establish a voting plan and exercise their rights.

“Whether it’s filling out an absentee ballot, going with a friend to the polls on that day, calling their friends, their neighbors, making sure they have the time and know the voting hours, all these things are really critical,” says Frye. “Because it’s important that everybody votes.”

Haniyah Philogene is a multimedia storyteller and Lifestyle reporter covering all things culture. With a passion for digital media, she goes above and beyond to find new ways to tell and share stories.