Eziya Bowden's suspicions rose as her Lyft driver started spraying the car, telling her how attractive she was and how he'd date her if she weren't so young.

A Raleigh, North Carolina, teen is safely back home after jumping out of a moving Lyft vehicle, acting on suspicions about the driver.

According to ABC11 News, Eziya Bowden, 17, was fresh off work when she leapt out of the car a few miles from her home and ended up in the emergency room.

Bowden’s suspicions began as soon as she got into the Lyft vehicle that had arrived for her. The driver made remarks that she found disturbing, such as how attractive she was and how he would date her if she weren’t so young.

“How many boys flirted with you? He said that right away,” Bowden recalled, according to ABC 11. “If I’m riding with a stranger, I’m always nervous, but I knew, this it was different. I knew that I wasn’t going crazy or anything, I knew that my body has never felt like that before. I’ve seen a lot of this so I knew I was feeling drugged.”

Bowden claimed that the car smelled like cigarettes when she first climbed inside. The driver sprayed something, and the odor subsided, but he persisted in spraying. She described starting to feel warm and disoriented. 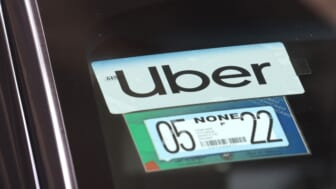 The teen acknowledged feeling terrified and deciding to get out of the car rather than fall asleep in it — and she ultimately exited the vehicle by jumping. Bowden said it happened so quickly that she blacked out after opening the door, only recalling landing and how terrified she was.

According to her, the driver never stopped during that time. She claimed he contacted the police for her while pretending to be an onlooker.

Also Read:
Uber releases report on number of sexual assaults; it’s down from the nearly 6,000 in 2017

A spokeswoman for Lyft informed ABC 11 that the company is aware of the driver’s concerning behavior. According to the spokeswoman, Lyft has blocked the driver’s access to its platform and is prepared to support any inquiry by Raleigh law enforcement.

“I don’t think that’s stopping him from anything else,” said Bowden, ABC 11 reported. “It doesn’t really bring peace to me at all.”

Authorities said they’d brought up no charges related to the incident. And while Bowden received a refund for the trip, she doesn’t see herself using Lyft or any other rideshare service again.