Award-winning filmmaker and producer Ava DuVernay, children’s advocate and educator Marian Wright Edelman as well as tennis champions Serena and Venus Williams each possess the kind of legacies that can impact generations to come. The National Portrait Gallery saw to it that those legacies aren’t forgotten.

Saturday night, the four women, celebrated chef and World Central Kitchen founder José Andrés, chief medical advisor to the President Dr. Anthony Fauci and legendary music industry executive Clive Davis were honored during the gallery’s biennial Portrait of a Nation Gala. While six were honored for their rightful place in American culture with official portraits unveiled that evening, Edelman was honored with a never-before-seen photograph by Ruven Afanador.

The event — featuring cocktails, a ceremony that writer Baratunde Thurston hosted and appearances by singer-songwriter Alicia Keys and Hilary Clinton — began outside the gallery with a lively red carpet.

Speaking with theGrio on the red carpet, Thurston said he was excited about the reflection the slate of honorees cast because, in his words, “A portrait is a mirror.”

Thurston continued, “One that’s constructed and crafted and allows us to see ourselves the way we want to be seen. So what portraits we put in this gallery, the National Portrait Gallery, is an aspirational mirror to me of who we can be, who we want to see ourselves as,” Thurston said. “So when I look at this slate of artists and the honorees, yo, I’m down. I’m very excited about this reflection of the country because I think it’s the best of us.” 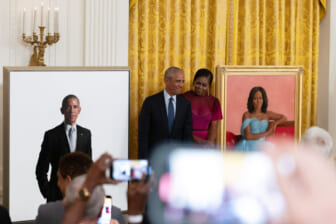 Pruitt told theGrio that he was shocked when he learned that he was selected to complete the portrait of Venus Williams. “I am old enough to have watched them be these public figures for so long. It just never crossed my mind that I would be engaging with them in any sort of way. It was amazing,” he said.

Addressing the surreal experience of working with the elder of the two Williams sisters and the opportunity that it presented to him, Pruitt said, “That moment of having this person who represents so much, I think for us and like I’m charged with doing this thing.”

Conversations between the two led to many of the portrait’s conceptual elements, which Pruitt hopes viewers can glean. He also hopes viewers leave with some significant themes from the piece. “The power of her. The stature of her,” he said. “The presence and meaningfulness in Blackness.”

Odutola, who happens to be a friend of Pruitt’s, told theGrio that she was “floored” to learn that Serena Williams had chosen her. Throughout the experience of completing the work, she felt that the 23-time Grand Slam winner had confidence in her.  “I think the whole process was very organic and I felt that she trusted me,” she said. “As another Black woman, I wanted to take care, to portray her as someone at ease, comfortable and laughing. I wanted to portray her in joy.” she said

The theme of joy was an element that Odutola worked very hard to achieve. “There’s a lot of unfair projections that are put on Black women in public spaces and they have to be so graceful all the time in every context. They are often performing themselves,” she explained. “They often have to be a certain way. It’s also a form of self-preservation. I wanted her to feel like there’s no one watching — it’s just her and she’s not performing for anyone. She’s just laughing and having a good time.”

While onstage, Venus Williams reportedly told the crowd she was in awe. “When you see the portraits, you realize history matters and what you do matters,” she said. 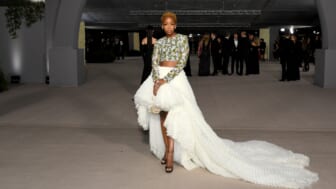 Also Read:
Fashion was the feature at the 2nd annual Academy Museum Gala

Gallery Director Kim Sajet noted that each honoree was chosen for her or his contributions to society. “This year’s Portrait of a Nation Gala strengthens our commitment to contemporary portraiture. We collaborate with contemporary artists to illuminate the history unfolding around us while also looking back at the changemakers who came before,” Sajet said in a press release following the event. “Portraiture is both the past and present, contemplative and motivating, traditional and avant-garde, and we encourage everyone looking at the portraits of this year’s honorees to reflect on how they might see history and want themselves to be seen.”

The seven new portraits are currently on view at the National Portrait Gallery in Washington, D.C., along with the recently returned portraits of the Obamas, which were initially unveiled in 2018.