What Israel is doing to African refugees is a moral atrocity

Israel is becoming an hostile and inhumane place for Black people 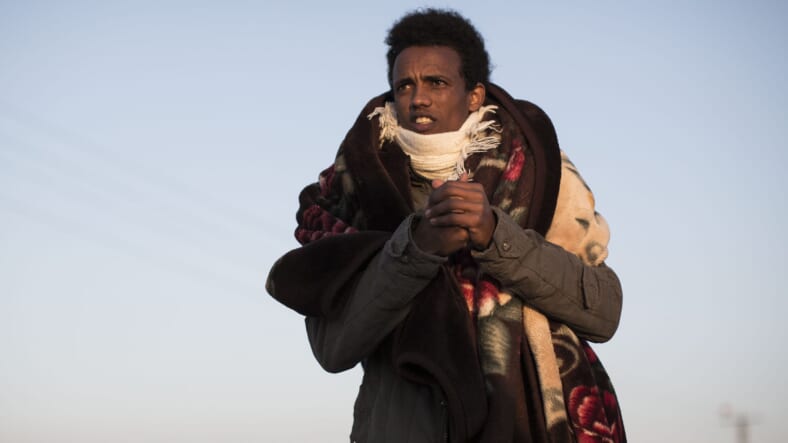 There are 38,000 African refugees and migrants who are living in Israel, mostly from Eritrea and the Sudan. And the rightwing Israeli government has issued them an ultimatum—leave Israel now or go to prison.

Israel–a nation founded by Jewish refugees who fled genocide from the Nazis in Europe–comes off as a shamefully racist, hostile and inhumane place for Black people.

Calling the African people “infiltrators”—the preferred derogatory name for the Black refugees—the government of Prime Minister Benjamin Netanyahu has told the refugees they must leave by April or face incarceration. They will reportedly receive $3,500 and money for airfare to return home or a third country such as Uganda or Rwanda.

Israel will also close the Holot detention center, which is housing over 1,000 Eritrean and Sudanese refugees who are subject to deportation.

Netanyahu added: “What I hear is pain and terrible distress. People are afraid to leave the house… Together with the foreign, culture and interior ministers, we will enforce a much stronger enforcement vis-à-vis employers, the lawless infiltrators and everything we need to do to increase enforcement.”

Officials in Israel are concerned that too many Black people threaten the “Jewish and democratic character” of the nation. Add to that a fear of being outnumbered and overrun by Palestinian Arabs—some of whom are second-class Israeli citizens, but many more of whom are subject to a military occupation, without rights, dispossessed of their land and living in the open.

For those who would claim Israel’s actions against these non-Jewish African refugees have nothing to do with race, consider the plight of Black Jews and Israelis of African descent. For example, the over 135,000 Ethiopian Israelis face racial discrimination and police violence, and were even forced to part ways with their ancient traditions so they were in line with Ashkenazi (European) Jewish standards.

“Israel is one of the most racist countries in the world,” said Tahunia Rubel, an Ethiopian-born Israeli model and actress. “People in Israel find it strange to see an Ethiopian woman who behaves like an Israeli.”

Sephardi and Mizrahi Jews from Spain, Portugal, North Africa and the Mideast face discrimination from Ashkenazi Jews in Israel. And Kenyan citizen and Jewish convert Yehudah Kimani was deported recently, hours after he had arrived in Israel on a visa to study at a yeshiva.

Detained at the airport, he was not allowed to contact his Israeli sponsors. “Do you want half of Africa coming here?” asked one visa official, denying allegations of racial discrimination but defending the deportation of the Black Jew.

Tamar Manasseh, the founder and president of Mothers Against Senseless Killings Chicago and a member of a predominantly-Black Chicago synagogue, wrote in The Forward that Israel is not her promised land because all the stories she heard growing up about people flourishing in Israel were of white Jews.

According to the blog Unruly–published by the Jews of Color and Sephardi/Mizrahi Caucus and Jewish Voice for Peace– rather than grant the Africans refugee status as required by international law, Israel uses laws originally designed to criminalize Palestinians wanting to return to detain Africans and deny their claims.

While other developed nations grant asylum to Eritreans and Sudanese at a high rate, Israel maintains a policy of coercing them and making their lives miserable, and regarding them a “cancer” and “a threat to the social fabric of society,” according to Human Rights Watch.

Meanwhile, these refugees face violence, persecution, slavery even death upon deportation, as a consortium of human rights agencies and NGOs warned in a joint letter.

“Israel says their crime is illegally crossing the border and that they are a threat to the security of the state. However, their real “crime” is that they are not Jewish and that they are Black,” according to Unruly. “As we work hand in hand with Palestinians and movements like #BlackLivesMatter and #Not1More in the United States, we must also act in solidarity with Black Lives threatened by Israel’s racist regime.”

T’ruah: The Rabbinic Call for Human Rights, called the Israeli decision immoral, and said a country founded by refugees, and one that led the way in enacting the 1951 International Convention on the Status of Refugees in response to the Holocaust should not turn its back on its responsibilities to refugees and asylum seekers.

“The Eritrean and Sudanese asylum seekers have fled to Israel to escape violence, slavery, and other brutal conditions in their native lands. As Jews, we know what happens when countries close their doors to those running for their lives,” said Rabbi Jill Jacobs, executive director of T’ruah, noting that sending asylum seekers to a likely death violates Jewish law and international law.

“And we also know that Jewish law demands that we accompany strangers likely to be vulnerable to attack, and that we refrain from handing people over to those likely to kill or enslave them,” she added.

Meanwhile, as Netanyahu’s white reactionary government deports people of color, so too does Trump in the U.S. Israel has made alliances with racists, anti-Semites and Islamophobes in Europe who are looking for an image makeover, and found common cause with Trump’s white nationalist administration, and plans to name a train station in Jerusalem after him.

This is why Israel is hostile territory for African refugees, and why tens of thousands of Black people who sought refuge there will find themselves deported or in jail.