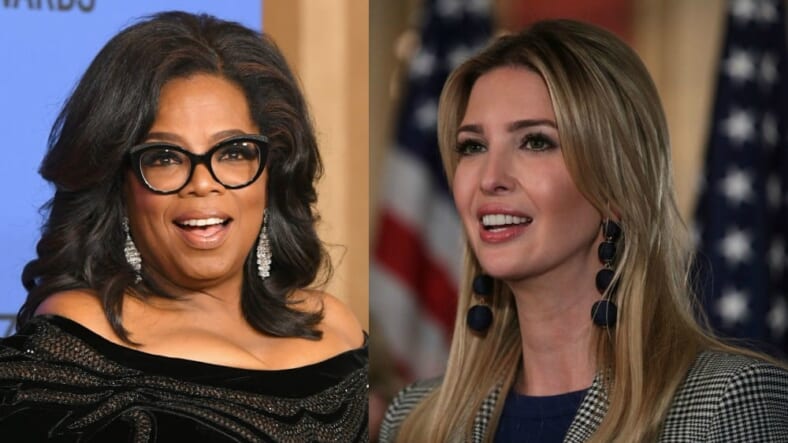 With everyone clamoring for Oprah Winfrey to run for president in 2020 after giving her acceptance speech at the Golden Globes on Sunday, some are wondering if she can add Ivanka Trump to her list of potential supporters.

She also followed Chuck Schumer and Nancy Pelosi on Twitter.

The responses to Ivanka’s tweet were mixed, with some scratching their heads and pointing out that if she wanted to be an advocate against sexual assault and harassment, she would have supported the women who accused her famous father, Donald Trump, of assault.

“Great! You can make a lofty donation to the Time’s Up Legal Defense Fund that is available to support your father’s accusers,” actress and activist Alyssa Milano wrote.

“I’m sorry @IvankaTrump but unless you wish to call out your own father for his taped admission to assaulting women, your desire to join the sisterhood cannot be taken with any validity…I know it’s difficult but #TIMESUP for your dad too,” Tara Strong wrote.

The response to Oprah’s epic speech at the Golden Globes instantly went viral. She spoke out against sexual assault and harassment and encouraged the star-studded room to envision a world where woman can finally feel safe.

She also spoke to women who don’t have the same fame and power that others who have come forward have had to defend themselves.

“I want tonight to express gratitude to all the women who have endured years of abuse and assault because they, like my mother, had children to feed and bills to pay and dreams to pursue. They’re the women whose names we’ll never know. They are domestic workers and farm workers. They are working in factories and they work in restaurants and they’re in academia, engineering, medicine, and science. They’re part of the world of tech and politics and business. They’re our athletes in the Olympics and they’re our soldiers in the military,” Oprah said.

By the end of the night, the Internet was praising her as the queen she is and calling for her to run for president.

The day after the speech from the Queen Mother of all things wonderful broke the internet, CNN’s Brian Stelter reported that Winfrey is ‘actively thinking’ about running for president.

“It’s up to the people,” Winfrey’s longtime partner, Stedman Graham, told The Los Angeles Times. “She would absolutely do it.”

Well, it looks like the people have spoken—and one of them may even be the current president’s own daughter, Ivanka Trump.