Who do young dark-skinned girls have to look up to? 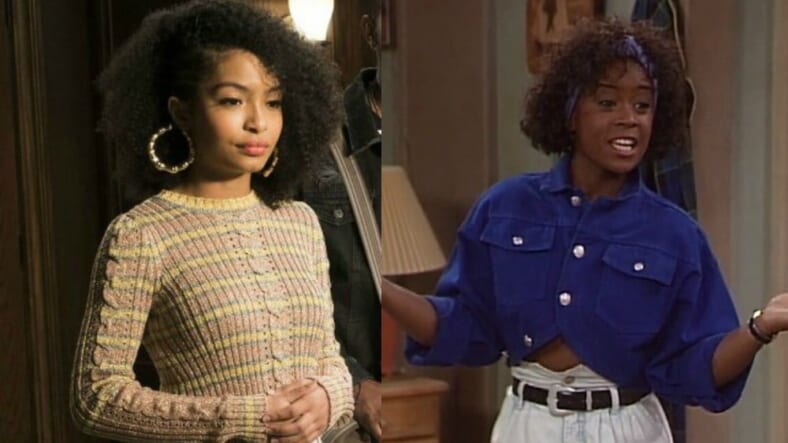 Grown-ish, a spin-off series that follows Black-ish’s Zoey Johnson (Yara Shahidi) as she navigates the cultural waters of college life, has a pretty promising future on television.

Its debut ranked as Freeform’s biggest launch in two years and Wednesday’s most-social cable program. The Kenya Barris-created show featuring a young cast of rising stars—Trevor Jackson as Aaron, Francia Raisa as Ana, Emily Arlook as Nomi, Jordan Buhat as Vivek, Luka Sabbat as Luca and singers Chloe and Halle as twins Jazz and Sky—also seems to be the sole coming-of-age program for teens with a Black girl at its center.

But despite the initial success, the diverse bunch and tackling heavy themes like drug use and underage drinking responsibly (and with comedic relief) straight out the gate, it’s pretty clear the show is still missing one thing to make it a series I’d stick with: a Kim Reese.

It wasn’t until I headed off to a historically Black college myself that I first watched A Different World, the Bill Cosby-ordered sitcom about Black students attending Hillman University.

The cast was lively, colorful and, most importantly, heavily melanated, not unlike my own HBCU, Norfolk State. I saw bits of myself in all the characters—Dwayne Wayne’s four eyes, Freddie Brooks’ awkwardness, Whitley Gilbert’s struggles with math, and so on. But the most spot-on representation that stuck out for a dark-skinned Black girl like me was Reese (played by Charnele Brown), the hard-working, overachieving medical student who was cool and down-to-earth.

It wasn’t that she was top of her class, because I certainly was not. But it was Reese’s confidence and sense of self that resonated for me as I struggled to accept my deep colored skin and heal from the complexion jokes I’d endured in high school.

I found solace in Reese’s honesty during the “Reclaiming Aunt Jemima episode,” in which Reese addresses colorism and recalls being teased for her skin color. Like me, it had pained her from childhood to young adulthood and she was fighting to be seen outside of the Mammy stereotype.

Reese’s character was my way of seeing myself outside of the box white supremacy stuffs dark-skinned girls into. I could be confident, I was not inferior to lighter skinned girls, I could go to med school (spoiler alert: I became a writer), and I can’t help but wonder if some young Black girl needs to see herself represented on Grown-ish.

The impact of hue

Look, this is no slight to the show. I’m always rooting for everybody Black, so big ups to Yara for carrying this major TV move solo. She is a remarkably talented young woman and activist who goes hard for all people of her community—Black, Iranian and female.

Grown-ish would have an even greater impact if a Kheris Rogers could see herself in a college-educated, boy-crushing, partying teen standing alongside Yara on campus.

In the Grown-ish’s defense, it’s not supposed to be like A Different World. In fact, it likens the social circle on the show to The Breakfast Club, a band of youngins’ just trying to find themselves, as most teenagers are. Plus, it’s very possible that the show won’t ever delve in that direction of colorism and identity politics.

But if the show wants to be a true reflection of what young kids go through on campuses across the nation, they’d better start by adding some more color to California University.