Somebody, make it stop. 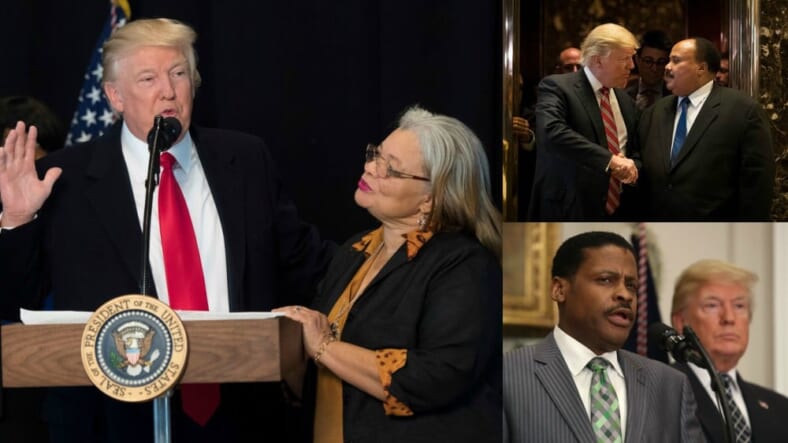 Do we need a national holiday from King family members damaging the legacy of MLK?

Reading some of the quotes from King’s family recently about President Trump has been exhausting.

It has become clear over the decades following Dr. King’s assassination that news media and various other entities will attempt to exploit the King family name in order to advance agendas that are antithetical to Dr. King’s life work – a life dedicated to and given for liberation and justice for all.

Unfortunately, the Trump era has produced an endless litany of opportunities for a select few to trade the legacy of Black liberation struggles for photo opps and self-hating soundbites.

And no, we’re definitely not talking about Bernice King.

For other members of the King family, the SMH-worthy behavior started early in the Trump era. Remember when Martin Luther King III had a “constructive” meeting with then President-elect Trump? King III took this meeting in the shadows of the controversial exchange between Trump and Rep. John Lewis who boycotted Trump’s inauguration – the one with the “largest crowd size period.”

King III echoed his father’s concerns about the rampant poverty in America but provided little detail about the meeting itself. How does Trump’s tax policy or anything else he has done in the first year of his term in any way honor Dr. King’s commitment to fighting poverty national and globally? It doesn’t.

Dexter King, MLK’s youngest son, told a TMZ reporter back in September that he can “only take [the President] at his word” on having “great love” Dreamers – a truly bizarre defense.

When the reporter reminded him that Trump often does not tell the truth he responded that you/he/we “should give him the benefit of the doubt.” That’s a whole lot of benefit for a President who has consistently misrepresented the truth in just the first year of his term.

How has any of Trump’s immigration rhetoric or policies – Mexican rapists, the wall, shithole countries that happen to be Black, or the failed Muslim ban – in any way honor Dr. King’s legacy of inclusivity amongst the human family? It hasn’t.

At an awkward photo-op with the President on January 12 2018, MLK’s nephew, Isaac Newton Farris Jr. claimed that President Trump was not a racist in “in the traditional sense.” By this, we are left to assume he means that the President hasn’t enslaved any Africans; he hasn’t raped or lynched any African Americans.

What is a racist “in the traditional sense?” Racism in America has always been traditional. It has historically been an integral part of the American fabric and in its undying persistence has taken many shapes and powerful iterations.

For ready reference, check the continuity between the transatlantic slave trade and the Prison Industrial Complex. In what way has President Trump proven himself to not be racist? He hasn’t.

Fox News contributor, Alveda King, MLK’s niece argued last July that President Trump is improving civil rights and that he is a “compassionate” and “brilliant” man. In what ways has this president availed himself as a compassionate or brilliant man? How has he advanced or improved the civil rights agenda nationally or globally? He hasn’t.

What did Alveda think of Trumpy’s “shithole” remarks? “Donald Trump is not a racist,” she told Fox and Friends.

Honoring the legacy of Dr. Martin Luther King requires the collective efforts of all who believe in equity and equality for all human beings. It is a herculean effort to be sure.

Maybe the awesome scope of Dr. King’s legacy is intimidating for those who bare his name and carry the weight of his relation. But as we wrestle with the challenge of Dr. King’s legacy on the occasion of this hard fought national holiday, we must also demand that those who share his name do more to honor MLK’s works in the face of the all out assault that Trumpism presents to the struggles of the Civil Rights era.

Dr. James Peterson is a writer, professor, media contributor and the host of WHYY’S “The Remix” Podcast. He is the author of several books including “Prison Industrial Complex for Beginners.” Follow him on Twitter @DrJamesPeterson.