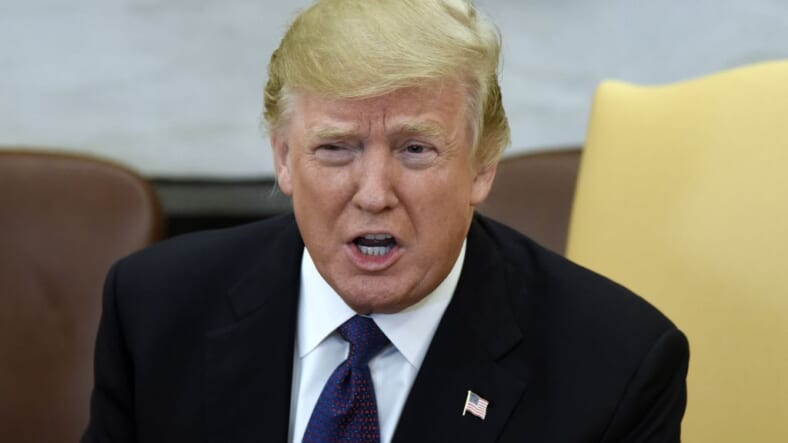 On Tuesday, Donald Trump‘s White House doctor held a press briefing to declare that the president is in “excellent” health.

Walter Reed National Military Medical Center Dr. Ronny Jackson told the press that he did have some concerns, however, about the president’s weight and sedentary lifestyle.

“I told the President if he had a healthier diet over the last 20 years, he might live to be 200 years old,” Jackson said. “He has incredible genes, I just assume. If I didn’t watch what I eat, I wouldn’t have the cardiac and overall health that he has. He’s very healthy despite that he does those things.”

Jackson added that he believed the president’s good health was in part due to the fact that he didn’t drink or smoke.

The president could be clinically obese

Still, Jackson said that he spoke with the president about changing his diet and exercise patterns, since he’s a pound away from being obese and admitted to not exercising.

“We talked about diet and exercise a lot,” Jackson said. “He is more enthusiastic about the diet part than the exercise part but we’re going to do both. He and I will work together over the next year to incorporate a good plan.”

At 6-foot-3-inches, the president’s recorded weight of 239 pounds is just 1 pound shy of clinically obese for his height. However, the New York Daily News noted that his height had been disputed before.

A picture of his New York driver’s license listed him at 6-foot-2-inches. That extra inch off would put the president in the obese category.

“The president’s overall health is excellent” but White House doctor Dr Ronny Jackson says @realDonaldTrump would benefit from “a diet that is lower in fat.” pic.twitter.com/ZHgTsUAiD2

Despite growing concerns over the president’s mental health and ability to perform the duties of his office, there was no psychiatric exam.

However, Jackson did say that the president asked to do a general cognitive assessment.

“The President did exceedingly well on it,” Jackson said. “The reason we did the cognitive assessment is plain and simple because the President asked me to do it.”

Despite Dr. Jackson’s expansive medical on President Trump, the results have sparked what is sure to be a growing movement: Girtherism.

In line with Trump’s Birtherism, in which he called for then President Barack Obama to prove his U.S. citizenship, critics are now calling on Trump to prove his weight and height. See the hilarity below.

And the #Girther movement begins. If you can clearly see Trump is morbidly obese and completely unhealthy RT this. If ignorant Trump supporters are on your last nerve RT this. If you’re committed to exposing #GOPLIES and are ready to play by their rules to do it RT this. #RESIST pic.twitter.com/o3t805TldX

If @AROD is 6’3″ tall, was he wearing 3″ platform shoes in this picture? #Girther pic.twitter.com/PiFwxTROQ3

For the record, @realDonaldTrump said he was 74 inches in 2012. Now his doctor says he’s 75 inches. And that one inch makes is BMI “overweight” not “obese.” I’m a #girther because old men don’t GROW an inch! pic.twitter.com/ehNxF9PjPL

Yes, we’re calling it the Girther Movement. @realDonaldTrump must step on a scale on live TV, and let beauty contestants judge the results. #GirtherMovement #Girther https://t.co/Mr90mTalOx