'OUT!' was Trump's response after Jim Acosta pushed him on his preference for white countries 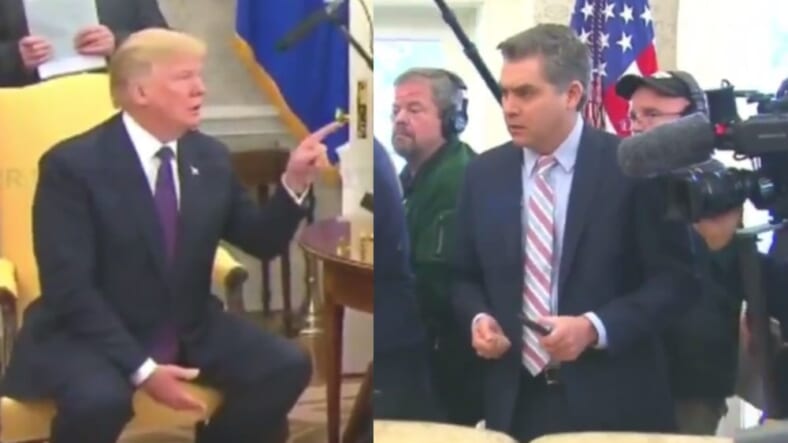 Donald Trump kicked CNN’s Jim Acosta out of the Oval Office because he didn’t want to answer questions about his “shithole” comments.

“I want them to come in from everywhere… everywhere. Thank you very much everybody,” Trump said.

“Just Caucasian or white countries, sir? Or do you want people to come in from other parts of the world… people of color,” Acosta pressed him.

But that was too much for Trump, who pointed directly at Acosta and said, “Out.”

President Trump orders CNN’s Jim Acosta to get OUT of Oval Office after latest outburst. pic.twitter.com/n2mxIkBdEn

Acosta’s questions come after the president has faced a deluge of backlash over racist comments about immigrants.

In a meeting on immigration last week, President Donald Trump used damning language in reference to immigrants from Africa, Haiti and other “shithole countries.”

“Why do we want all these people from ‘shithole countries’ coming here?” Trump told a bipartisan group of senators in the Oval Office, according to the Washington Post and CNN.

The president’s comment was made during a meeting with six senators hoping to come to a compromise on immigration.

After Sen. Dick Durbin proposed to end the visa lottery in exchange for Temporary Protected Status (TPS) for countries like El Salvador, Trump reportedly interrupted him when Durbin got to Haiti.

It was these comments that prompted Acosta’s questions about Trump’s seeming racial preferences on immigration.

Trump has, of course, denied the accusations and said that he didn’t use that language in the meeting.