It's only been five months since Williams gave birth to little Alexis Olympia, and already, she's out here proving that she's still a total badass. 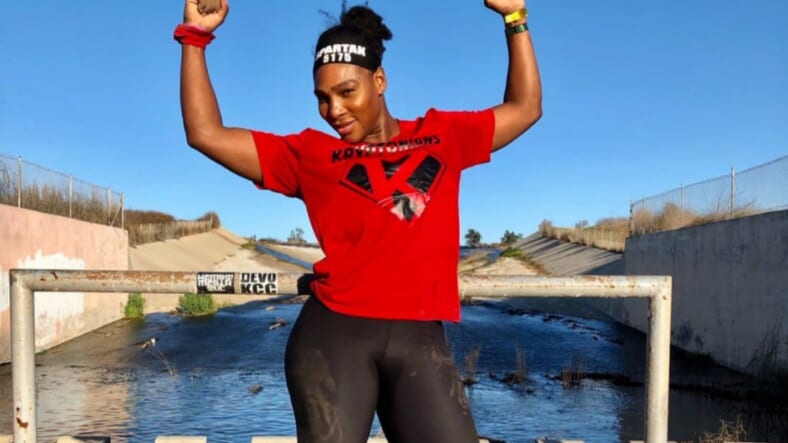 Serena Williams continues to prove that there’s nothing she can’t do.

It’s only been five months since Williams gave birth to little Alexis Olympia, and already, she’s out here proving that she’s still a total badass.

Her latest epic achievement? A Spartan race that she ran with her husband, Alexis Ohanian, Sr. The obstacle course included a mud pit and gymnastics rings, and she smashed it.

She posted video on her Instagram page so we can all watch in awe.

“Competed in a Spartan race this weekend with SOME of my @kryptonian teammates,” she wrote. “This first video was a 5 and a half foot jump half way through I knew there was no chance to get my legs over so I remembered my gymnastics classes from my youth!”

U must Slide for more pics!!! Competed in a Spartan race this weekend with SOME of my @kryptonian teammates. This first video was a 5 and a half foot jump half way through I knew there was no chance to get my legs over so I remembered my gymnastics classes from my youth! The rings lol look I tried! Hahahah

We all knew she was tough

But recently, she told the story of a different kind of grit: she had to save her own life after she gave birth.

According to Vogue: “She walked out of the hospital room so her mother wouldn’t worry and told the nearest nurse, between gasps, that she needed a CT scan with contrast and IV heparin (a blood thinner) right away. The nurse thought her pain medicine might be making her confused. But Serena insisted, and soon enough a doctor was performing an ultrasound of her legs. ‘I was like, a Doppler? I told you, I need a CT scan and a heparin drip,’ she remembers telling the team. The ultrasound revealed nothing, so they sent her for the CT, and sure enough, several small blood clots had settled in her lungs. Minutes later she was on the drip. ‘I was like, listen to Dr. Williams!’”

After that harrowing situation, Williams popped open her fresh C-section wound from the forceful coughing caused by the blood clots. Williams and her daughter are now faring well, but women on Twitter rallied together to highlight that Williams’ post-partum experience is not uncommon for women, especially Black women.

According to the Centers for Disease Control and Prevention, Black women are three to four times more likely than white women to die during pregnancy or childbirth. This chilling fact has been noted for decades.

Williams later responded to the outpouring of support.

“I didn’t expect that sharing our family’s story of Olympia’s birth and all of complications after giving birth would start such an outpouring of discussion from women — especially black women — who have faced similar complications and women whose problems go unaddressed,” she wrote on Facebook.

“These aren’t just stories: according to the CDC, (Center for Disease Control) black women are over 3 times more likely than White women to die from pregnancy- or childbirth-related causes. We have a lot of work to do as a nation and I hope my story can inspire a conversation that gets us to close this gap.”