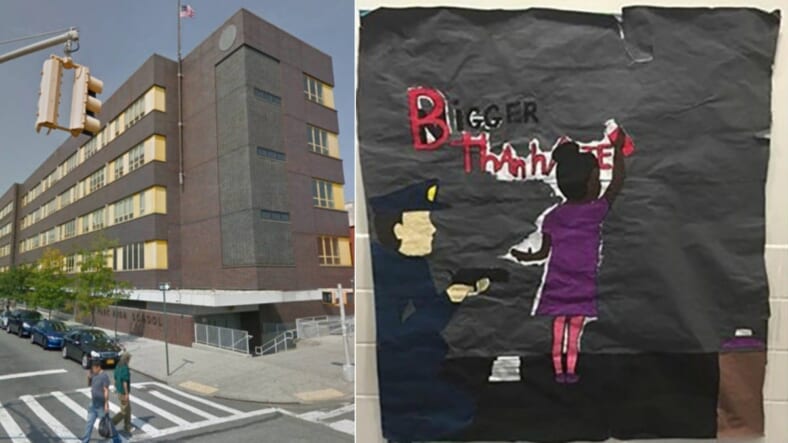 After multiple complaints, Sunset Park High School in Brooklyn was forced to move a controversial poster that showed a cop pointing a gun at a black child.

The poster was originally put up in the lobby of the high school on Wednesday. The art, made by a student, depicts a cop crouching and aiming his gun at the back of a black girl and she spray paints “Bigger Than Hate” on a wall.

The poster was made in an after-school program and was inspired by a near identical image created by the art duo Madam Muse.

Sunset Park High School faced multiple complaints on Wednesday and Thursday after someone posted the photo on Facebook and asked those who objected to it to call the school and let them know how they felt about it.

The school took the poster down from the lobby area and relocated it to another area of the school.

“We got a million calls about it,” a school source stated. “They put it up and took it down and moved it on the same day.”

An NYPD spokesman was asked to comment on the school’s decision to put the poster up in the lobby but he declined to comment.

“Holy crap, the world is so lost,” one Facebook poster wrote in response to the art. “How can a principal feel this is ok. A whole staff for that matter.”

“God bless our #NYPD,” said another.

Sunset Park High School students defended the poster as well as the school’s right to display it wherever they want.

“It’s free speech, right?” one sophomore asked. “Just because people from wherever call in, we have to take it down? I don’t think that’s right.”

One other student said that many of those who attend the school are suspicious of police and that the poster simply reflected that sentiment. “It sends a strong message,” she said. “I don’t think they should have moved it. That’s how the person who made it felt.”

Sunset Park High School teachers did not have much to say on the choice of the school to post the image.

— Michael B. Jordan on the cover of British GQ is everything —

“This is the reality these days,” one said. “That’s all I can say about it.”

The Department of Education confirmed that the poster was initially displayed in the lobby and that it was relocated after so many complaints were received.

“All schools must provide a supportive and inclusive learning environment, and we encourage students to express themselves in creative ways,” said DOE spokesman Michael Aciman. “The poster was made as part of an after-school program and it has been moved.”