Killmonger is a fictional character in ‘Black Panther’, but his misogynoir is real

This writer has a few questions for Black men 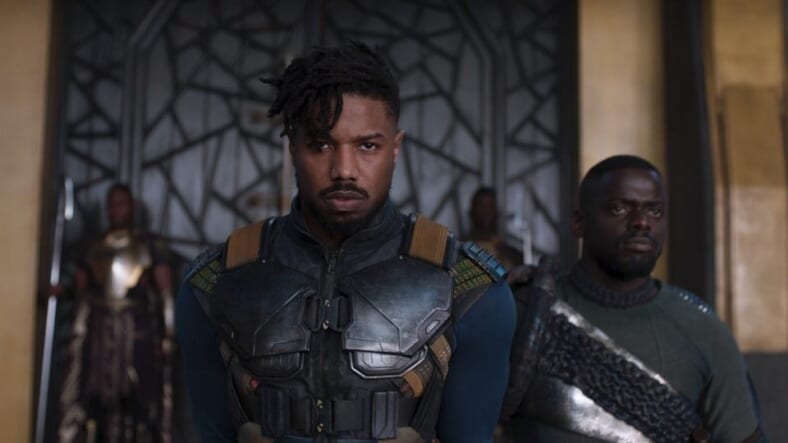 The misogynoir is strong with Killmonger, the anti-hero in the Ryan Coogler directed Marvel blockbuster Black Panther. It’s an accurate depiction of real life African-American men in contemporary society.

The Black American/half African’s behavior as he continent hops in his Black freedom adventure, represents the complexity and humanity of powerful and flawed Black men.

Black folk from Accra to ATL collectively went “hmmph” when Killmonger, played by Michael B. Jordan, dropped the gem, “Bury me in the ocean with my ancestors who jumped from ships, ’cause they knew death was better than bondage.”  He longs to be truly free and we can all identify with that.

We empathize with this disregarded, oppressed, and resilient Black man who some have praised as the real hero of the film because of his resolute devotion to Black freedom. He has all the reason in the world to be angry—abandonment by his African people and abandonment by the white supremacist state.

Killmonger represents the neglected Black boy we are constantly rooting for on and off-screen. We know Jordan’s face as the representative of Black man dreams deferred. Seeing Killmonger rise out of the Oakland ghetto recalls Fruitvale Station (also directed by Oakland native Coogler), the film where Jordan portrays Oscar Grant, a 22-year-old father unjustly murdered at the hands of law enforcement.

I remember a young Jordan in HBO’s The Wire, where his character ‘Wallace’ gets caught up working a corner in a Baltimore hood and ends up dead. There is good reason that people want Killmonger to succeed. We root for the underdog, the one set up for failure instead of success.

After all, he is only fighting to fulfill his murdered father’s dream, just like T’Challa (Chadwick Boseman), right? He only wants better for his people, those who have less, just like Nakia (Lupita N’Yongo). And let’s be real, he gets a little more wiggle room as a villain cause he’s foine.

-Now we know why Michael B. Jordan is hot AF-

While watching, I can definitely say that I wanted him to win just as much as I did T’Challa. But I won’t give Killmonger a pass for how he treats Black femme characters in Black Panther. I won’t overlook how Killmonger so effortlessly murders Black women in this film.

It was apropos to create a misguided African-American male villain who assaults Black women solely to exercise power. It was incredibly realistic to have Killmonger enact violence against the very Black women who hold him down. It is also telling that as the representation of Black American suffering in the film, Killmonger so easily takes the lives of his Black “sisters.” Unfortunately, this is all too reminiscent of the very real Black male privilege that exists in America.

As far as the film is concerned, first there is the Black woman who Killmonger shoots in the head. “It’s gonna be okay,” he says before he pulls the trigger. Just a few scenes prior, they were making out in the back of an ambulance after she played an integral role in their London vibranium caper. Even Klaue thought Kllimonger would care at  least a little bit about her. He used her as bait when he taunted Killmonger with a gun to her head.

Ultimately, Kilmonger decided to shoot her after she apologized to him for putting him in that situation. But Killmonger’s really down for Black people, huh? There is a scene just dedicated to the dead girl’s face, one side lying in its own blood. This is not how Black freedom looks.

Shortly after he takes the throne, Killmonger chokes an elder woman who cultivates and protects the very flower that makes him strong. He seemed to do this just to demand her obedience.

Killmonger then goes on to make a sacrificial display of one of the Dora Milaje (who always remain loyal to the throne, even when he shows up to their country wildin’ out). He holds the warrior by her neck and then slices the most vulnerable part of her body.

In the same battle, Killmonger picks up Nakia and throws her small frame for what looks like hundreds of feet. After disarming Shuri, he towers over her defenseless body, projecting onto the screen a power dynamic we don’t otherwise see in Black-girl-magical Wakanda.

It’s normally a place where Black women are warriors, engineers, spies, queen mothers and who look fly while their dark skin glows in the correct lighting. It is laughably ironic that Killmonger can only defeat the princess by wearing the suit she created.

Now we can only assume that Killmonger is raised by his Black mother and her tribe. Which brings me to my next question: Why do I always see violence against Black femmes pouring from the same bodies nurtured by Black mothers?

It is awesome when Killmonger mentions Huey P. Newton, but how about a Black man saying the names of Assata, Angela or Audre. Ida B., Mary McLeod, Paulie Murray or Fannie Lou? That’s present-day Opal, Alicia, or Patrisse. We continue to show up for you, Black men. Yet, you beat us and rape us and barely let us speak.

Black men: Why are Black women and Black trans women and Black feminine identifying folk so disposable to you? Especially when they’ve historically and consistently fought for you and taken care of you?

And those of you who don’t inflict violence, but claim #notallmen and remain complicit in our abuse, I’m talking to you too. You are empowered by our assaults, but later end up on your knees, surrendering to your Okoye (Danai Gurira) when it suits you.

But real talk, our communities are not in Wakanda. They’re in Chicago, Harlem, Oakland, Detroit. Black girls and femmes are suffering at the hands of men– many who swear they value Black lives. I already mentioned our Dora Milaje, so my final question is: When will Black men come down from their mountain and join the fight?

Ayaana “Ya Ya” Marie is a Harlem native, storyteller and photographer. She was raised on Toni Morrison and turkey bacon, pro-black and anti-pig. She hopes to contribute to a long tradition of healing arts through creative expression and collective responsibility.