Oprah Winfrey takes a ‘SuperSoul’ approach in ‘A Wrinkle in Time’

Find out how she challenges us all to make the world a better place. 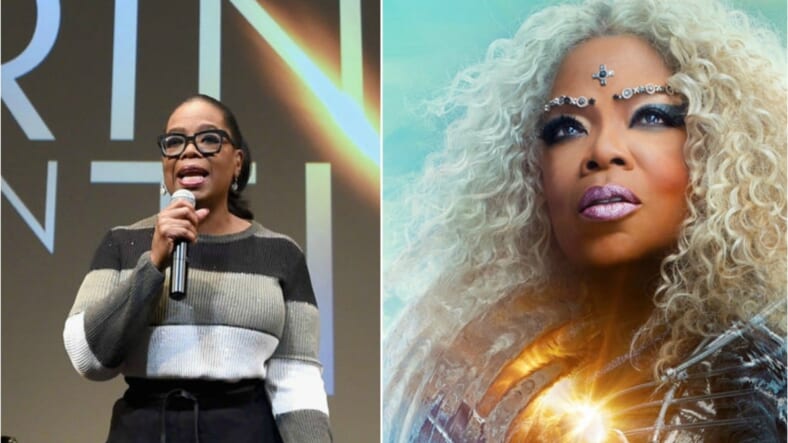 “Close your eyes; see with mine.”

These are the words said by Oprah Winfrey as the character, Mrs. Which in her latest film, A Wrinkle in Time.

In the scene, the omnipotent Mrs. Which offers Meg Murry (played by the prodigious Storm Reid) an opportunity to see beyond the despair Meg is feeling  after her father’s disappearance into another dimension.

Through Mrs. Which’s eyes, Meg can see that the bully who torments her at school is struggling with an eating disorder. She can see that the principal who has been hard on her is actually facing jealousy from his colleagues. And, she can see that the popular guy she thinks everyone loves really has an emotionally abusive father. It doesn’t erase Meg’s pain, but it does shine a light on the concept that things aren’t always as they seem. Meg’s journey in the film is one where she learns to look beyond the surface and find the light on her own and when she’s having problems finding it, she learns how to become the light herself.

A Warrior of the Light

Helmed by Ava DuVernay—who, with this film, became the first Black woman director of a $100 million blockbuster—A Wrinkle in Time is packed with these kinds of spiritual life lessons. In fact, the Disney sci-fi adventure (adapted from the classic book) is basically a 2-hour version of Winfrey’s famous SuperSoul Conversations.

“It is!” Winfrey laughs in agreement at the comparison. “There were actual days on set I’d say, I can’t believe I get to say these words.”

READ MORE: A WRINKLE IN TIME IS NOT WHAT YOU ARE EXPECTING

Speaking directly to the children in the film and those in the audience who will no doubt pile into theaters this weekend, Winfrey wants to challenge them all to find their place in the universe and to “be a warrior” for the light. She believes the film itself is a call to action for people to find their purpose and be an active participant in creating the kind of world they want to see. In many ways, A Wrinkle in Time is an affirmation for students like the Dream Defenders, Black Lives Matter activists and the Parkland school shooting survivors, all of whom have found ways to passionately manifest this ideal through their work.

Listening to the inner call

For anyone who is searching and wondering how to find their place in the world or hear the “cry out in the universe,” as Mrs. Which describes it in the film, Winfrey’s advice is discernment.”

Making the next move

It’s a lesson Winfrey continues to learn because of her desire to always be obedient to “all the definitions of what we call God in the world” and what they are telling her. She listens intently and waits for confirmation to know what her next move should be.

READ MORE: Ava Duvernay on why she fought so hard for Storm Reid

“Every single time I have been wise enough, centered enough to listen to that call, not what my head is saying, not what everybody else is saying, I don’t care if a million people are saying it, you can’t allow yourself to be flattered into doing something,” said Winfrey. “You’ve got to be centered enough to know, what is the call? I am really obedient to what is mine and what is not.”

Brooke Obie is the author of the award-winning Black revolution novel ‘Book of Addis: Cradled Embers.’

Check out how these celebs, who have all found ways to manifest the light in their own ways, are celebrating A Wrinkle in Time, which opens this weekend.

.@Google searches for female directors spiked in 2017, so #InternationalWomensDay  is the perfect time to celebrate a visionary, awe-inspiring queen. Make sure you head to theaters this weekend to check out @Ava’s beautiful new film, #WrinkleInTime . #IWD2018 pic.twitter.com/x7p5a5ZAbD

It’s @WrinkleInTime day!!!!!!! Congrats to @ava @stormreid @Oprah @RWitherspoon @mindykaling and all the creative energies behind this massively important film. Anyone who wants to go with me tonight, meet me at the AMC on

Thank you @ava for inviting me and @nessnitty to the premiere of your brilliant film A Wrinkle in Time! Continue to pave the way for Black women in Hollywood. I can’t wait to see what’s next! pic.twitter.com/JzlBGJhFlx

Today is #internationalwomensday and the eve of @WrinkleInTime hitting theaters everywhere. So today I want to celebrate a true SHERO @Ava. She is a fierce filmmaker and a warrior for women. Take action today and buy your tickets for A WRINKLE IN TIME. … https://t.co/lh8eOPLVWf pic.twitter.com/OwSZYO8xCt