Agencies are eager to cut the middleman and tell their own stories. 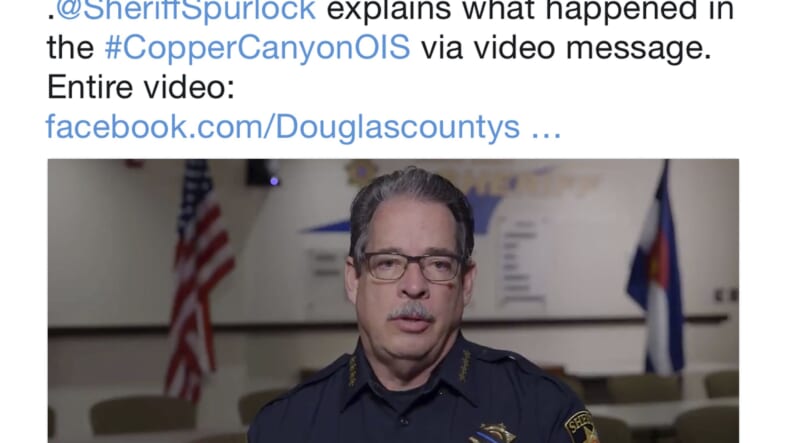 In this frame grab from a Monday, Jan. 8, 2018, video on the Twitter feed of the Douglas County, Colo., Sheriffs Department, Sheriff Tony Spurlock speaks to subscribers to explain the incident in which a deputy was gunned down responding to a call on Sunday, Dec. 31, 2017. The high-profile case illustrates how law enforcement agencies are increasingly lockstep in their approach to controlling the narrative after incidents. (Douglas County, Colo., Sheriffs via AP)

Then, an introduction: “I would like you to hear from me, what happened,” Douglas County Sheriff Tony Spurlock says, facing the camera.

The next eight minutes provide a carefully edited glimpse of the events that led to a 29-year-old deputy’s Dec. 31 death inside an apartment complex south of Denver.
The video posted Jan. 8 on the department’s social media accounts is punctuated by gunshots and shouts of panic and pain, and undoubtedly illustrates the danger Deputy Zack Parrish and other officers met during that call. Open government advocates also consider it a dramatic example of law enforcement agencies’ expanding efforts to release their own accounts of events to the public and media.

There’s nothing wrong with police communicating through social media, open government advocates said. But they worry it allows law enforcement to bypass questions from traditional media and warn that taking advantage of the tools requires agencies to be completely transparent, whatever the situation.

In Colorado, Parrish was among three deputies in three counties shot dead while on duty in barely more than a month. The calls that preceded the killings varied — a mentally ill veteran, a reported fight and a stolen car investigation. But the departments took similar approaches, relying on their social media accounts to release information and giving news outlets limited opportunity to ask questions about what happened.

Police have made use of social media for years, from viral videos of officers’ dance-offs with kids to the Boston Police Department’s extensive use of Twitter following the 2013 marathon bombing.

Agencies are eager to cut the middleman and tell their own stories, said Lauri Stevens, a former TV news reporter who founded an annual conference in 2010 that teaches departments about promoting themselves on social media.

“It’s not any less valid than any media, in this day and age,” she said.
Stevens said many agencies are getting better at connecting with residents on routine days, sharing updates and knocking down rumors during high-profile incidents.

Sgt. William Hutchison, Palm Springs police spokesman, presented at Stevens’ conference last year about his agency’s communications strategy after two officers were shot dead in 2016. Looking back, Hutchison said he would have posted even more information directly to Facebook and Twitter.

Hutchison said he doesn’t view social accounts as a way to avoid traditional media, and complimented local coverage of the officers’ killings.

“More people watch the news than the number of people who watch us, and you’ve got to maintain that relationship,” he said. “But law enforcement is becoming more skilled and has (our) own platform now that we didn’t have before.”

But that takes a staff capable of providing regular updates as they balance other responsibilities, a challenge for smaller departments on any day.

Sills provided no social media updates and instead held regular press conferences on the case. He continued taking reporters’ calls on his personal cellphone through the day the inmates were arrested.

In Douglas County, the department cited an ongoing investigation to deny media requests for body camera footage from the call that led to Parrish’s death. Days later, the agency posted its video to Facebook and Twitter , which includes some of the material denied to media.

The video omits the shooter’s face and voice. And it includes only audio of the moment Matthew Riehl fired through his bedroom door, fatally wounding Parrish and striking four other officers trying to take the shooter into custody on a mental health hold.

In an interview with The Associated Press nine days after the shooting, Douglas County’s sheriff defended releasing the edited video after the department denied journalists’ open-records requests for the complete footage.

“I knew that if I went to the press, radio and television, I’m going to get 60 seconds, and the rest was going to hit the editor’s floor,” Spurlock said. “I’m not going to be able to tell the story in such a fashion that I thought was appropriate for the dignity of Zack Parrish and the other four officers that were shot — and what I believe the citizens of Douglas County deserve.”

No portion of the unedited footage suggests the office’s video posted on social media inaccurately portrayed the shooting.

The files didn’t include Parrish’s body camera footage, and sheriff spokeswoman Lauren Lekander said it won’t be released “due to the sensitive nature of the material recorded on his camera.” Members of the SWAT unit that entered the shooter’s apartment and killed him don’t wear body cameras, she said.

Social media’s widespread use makes it a tempting resource for law enforcement, but police must use it responsibly, said David Alan Sklansky, a Stanford criminal law professor who has studied law enforcement use of technology.

“If a department wants its feed to be trusted, it needs to earn that trust partly by making sure it is candid and forthright in what is posted,” he said.

Failing to uphold that standard can prove damaging, as in San Antonio where the Express News found that a promotional police department video claiming to feature “real 911 calls ” actually included a fake call and two real calls with modified details. The newspaper uncovered the issue by requesting the original 911 recordings.

The agency admitted it was a mistake to include some of the calls but defended the video, which was intended to discourage the use of 911 except in emergencies.

“This was a hugely successful social media campaign that amassed 122,870 views on Facebook, Twitter and YouTube and even more through traditional media nationwide,” Jeff Coyle, director of government and public affairs, said in a statement provided to the newspaper.

Law enforcement in the other Colorado counties that lost officers this winter, Adams and El Paso , also depended largely on social media to share updates about the shootings, repeatedly directing reporters seeking more detail to those feeds. Meanwhile, press conferences held within hours of the officers’ deaths allowed for no media questions after officials read statements.

Residents inevitably take to social media when they see police swarming an area, and the department’s accounts should provide official updates before others weigh in, Elder said.
“We have to be proactive,” he said. “Otherwise we’re following the story; we’re letting somebody else write the narrative.”