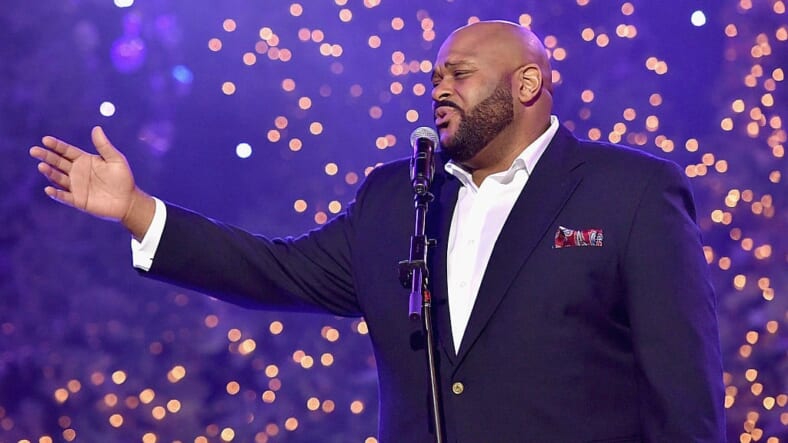 Ahh, the memories…seems like just yesterday that American Idol introduced Ruben Studdard and his incredible voice to viewers across the country. It wasn’t long before the R&B lovers became obsessed with the singer and fans affectionately nicknamed him “Velvet Teddy Bear.” To our collective delight, the singer emerged the show’s season winner in 2003.

And now according to People,  the Season 2 American Idol Winner released Ruben Sings Luther, a tribute album to Vandross, the R&B legend the 39-year-old singer has been listening to since he was a boy growing up in Birmingham, Alabama.

“It’s been a really fun ride doing this album,” he tells People. “We recorded great material. I think people are really going to enjoy it.”

For the playlist, Studdard selected 10 of Vandross’ most popular hits, including the classic “Here and Now”, “Always and Forever” and “A House Is Not A Home.” Then he put his own unique spin on them.

“I’m just trying my best to get as close as I possibly can without trying to copy him verbatim,” he explained. “My interpretation.”

The homage to Vandross is fitting, as Studdard has been compared to Vandross since the first note he sung on American Idol. If there was ever an artist that would do Vandross justice, it’s certainly Studdard. The star told People:

“I don’t think people were only focused on the fact that I sounded like or looked like Luther but rather, ‘Oh this guy reminds me of Luther because he interprets songs well.”

Beyoncé isn’t the only artist coming for your pockets this spring and summer.

Studdard heads out on a 22-city “Always and Forever” tour, starting April 8 in Sacramento, California, which he says aims to come as close as possible to the shows the fabulous Vandross was well known to put on during his heyday. From costumes to choreography Studdard insists, “We wanted to do it the correct way.”

Sounds like fans are in for a real treat.