Is Kim Zolciak-Biermann a racist or did Nene Leakes go too far?

The repercussions of #Roachgate went way further than we thought. 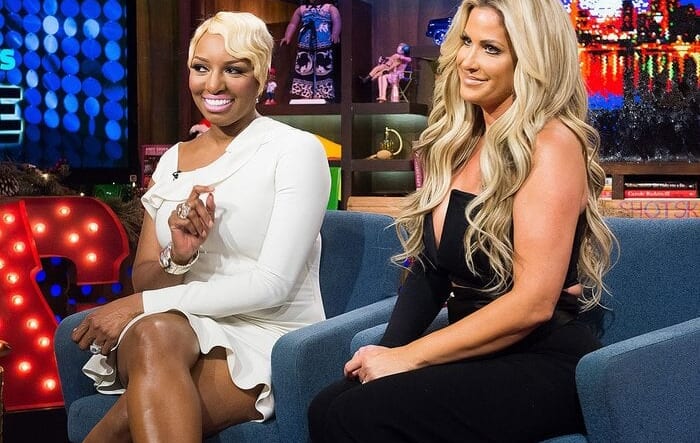 The months-long lead-up to #Roachgate finally came to a head on this week’s episode of Real Housewives of Atlanta, and it seems the fallout was pretty serious.

ICYMI, Nene Leakes accused Kim Zolciak-Biermann of being racist after her 20-year-old daughter, Brielle, posted a video from Leakes’ bathroom claiming it was infested with cockroaches.

Leakes was not too pleased when Zolciak-Biermann sent the video to the entire cast and she took to social media to wage war against her former friend.

“Kim & her daughter oops whole family are racists! What her daughter did at my home… was racist, learned behavior etc,” she posted on Instagram. “Kim is a calculating bio polar racist with a horrible mouth, who uses black folks for her come up.”

READ MORE: Nene Leakes sticks it to her critics by wearing sweater with mugshot

Since then, Leakes has made light of the situation several times, even dressing up as an exterminator with her husband wearing a roach costume for Halloween.

On Sunday’s episode, Nene Leakes revealed what really set her off about the comments.

“That word ‘roach’ just ain’t the word I needed to hear her saying,” Leakes said on the show. “It sounds very racial when you are speaking to an African-American person and talk about roaches. Because people feel like you associated that with the ghetto or trash. Black people do not receive that very well.”

Viewers learned that Zolciak-Biermann paid a hefty price for Leakes’ claims and insists she and her family received death threats as a result.

“We’ve had to hire security. I’ve had people come to the gate at my house,” she told Shereé Whitfield on Sunday’s episode. “She wants to pull the race card. That’s the devil, bitch…She spent so many years trying to sabotage my name and I just let it roll. Now you’re f—— with my kids? ‘The whole family is racist, prejudice?”

Zolciak-Biermann says she sent Leakes a ceast-and-desist letter from her attorneys after she publicly called her a racist, and the legal move cost her $20,000.

“I don’t take this lightly. It’s one thing like I said to kind of banter back and forth and have an opinion,” Zolciak-Biermann told E!’s Daily Pop in October. “This is far beyond just having an opinion.”

She also opened up to Larry King about the allegations later that month.

“It’s inappropriate. In this day and age, people are dying over racism…I’m on a show with all African-American women and I’m the only one that’s ever been on the show that’s Caucasian, so it’s the card that sometimes they play and it’s gross. And I won’t allow it.”

So far, the other cast members of RHOA are divided on the issue.

Despite her disdain for her co-star’s actions, Kenya Moore does not agree with NeNe’s assertion that the mischief was racially motivated.

“I don’t think they’re racists for that,” she told TheGrio, exclusively. “They’re just disgusting for that.“