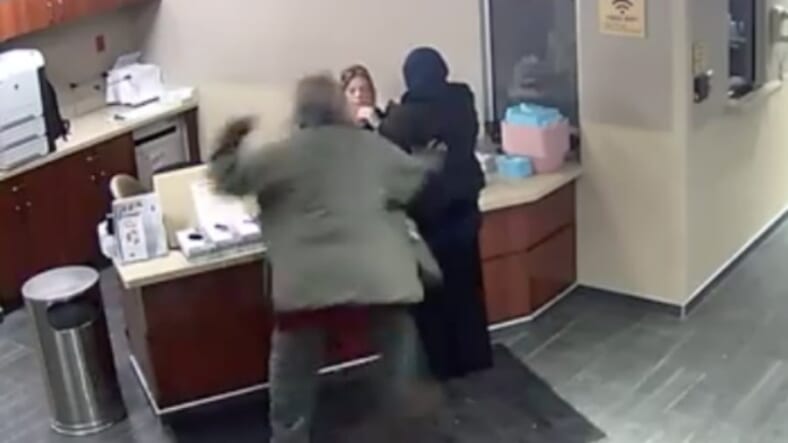 A white man brutally attacked a 19-year-old Muslim woman while she waited to get checked into a hospital for injuries she sustained from falling on ice, reports Raw Story.

John Deliz who had just been released from the hospital, went up to the 19-year-old woman wearing the hijab and beat her in the head without saying a word. The man was walking the halls of the hospital on the hunt for cigarettes and had been instructed by security to take a seat in the ER until his ride arrived, before he began his brutal assault.

When he entered the ER, Deliz took the liberty to beat the woman for no apparent reason and security cameras caught the details of the attack.

“She never saw it coming,” Majed Moughni, the young woman’s attorney, told WDIV. The attorney said his client also plans to sue the Beaumont Dearborn hospital for emotional damages, and they will lodge an investigation to find out if the attack was a hate-crime based on her religion.

The prominent attorney has also been the subject of the attack. He has a large Muslim client base and recently sued the Little Ceasars pizza chain for fraudulent claims of making halal pizzas for his Muslim and Arab clients.

Check out the graphic attack below.

News update:This story is now going national.I've obtained this shocking video taken from inside Beaumont Hospital Dearborn. It shows a 19 year old woman coming in for treatment and she is immediately attacked by a 50 year old man.The man was accosting people in the ER, he wasn't told to leave by security and then he attacked. The hospital is now facing a lawsuit. See the entire report here:WATCH: Surveillance video shows teen attacked checking into Beaumont Dearborn emergency roomhttps://www.clickondetroit.com/news/watch-teen-attacked-checking-into-beaumont-dearborn-emergency-room-