She was known as the "Mother of the Nation." 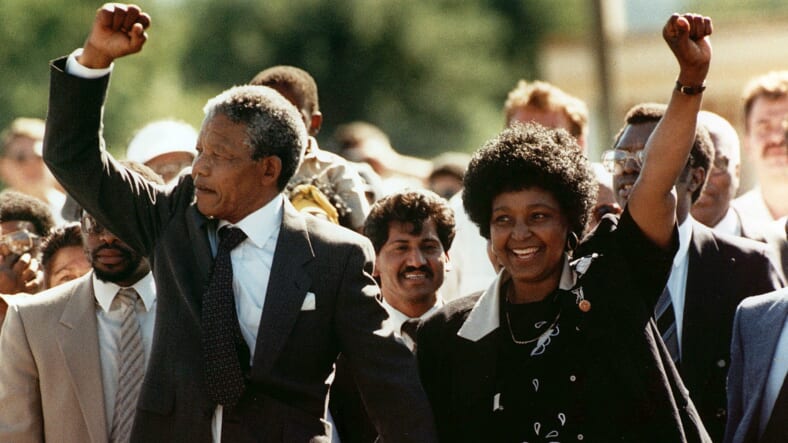 A statement released by the family reads that she “died after a long illness, for which she had been in and out of hospital since the start of the year. She succumbed peacefully in the early hours of Monday afternoon surrounded by her family and loved ones.”

Madikizela-Mandela’s former husband, Nelson Mandela, spent 27 years as a political prisioner in South Africa, during which time she continued their shared work of dismantling apartheid. Upon his release from prison, Mandela and his Madikizela-Mandela walked hand-in-hand, a moment that was captured in an iconic photograph.

When Mandela was elected president, Madikizela-Mandela served as South Africa’s first lady. The pair divorced in 1996.

When Mandela died in 2013, Madikizela-Mandela told the Associated Press that she felt “very blessed” to have been with her ex-husband when he died, describing how she sat by his bedside until he drew his last breath.

She spoke to Britain’s ITV news about the pain of losing Mandela, saying that “one never prepares for death” and describing the “heavy feeling” surrounding his passing.

“I went close to him and I noticed he was breathing really slowly. I was holding him trying to feel his temperature and he felt cold. Then he drew his last breath and just rested. He was gone,” she said in an interview.

She told ITV the most difficult moment of that experience was when the military came to remove Mandela’s body and she realized “he was leaving the house for good.”

She also described the pain at seeing him lying in state, saying that “it’s very hard for the family to even share him even in his death after sharing with the whole world and our whole country while he was alive.”

“He’s still not really just ours, the family. He still belongs to the whole world and we have to share,” she said.

Madikizela-Mandela spent decades as an activist in her own right outside of her famous ex-husband’s work. She was known as the “Mother of the Nation.”

She is survived by her two daughters and several grandchildren.