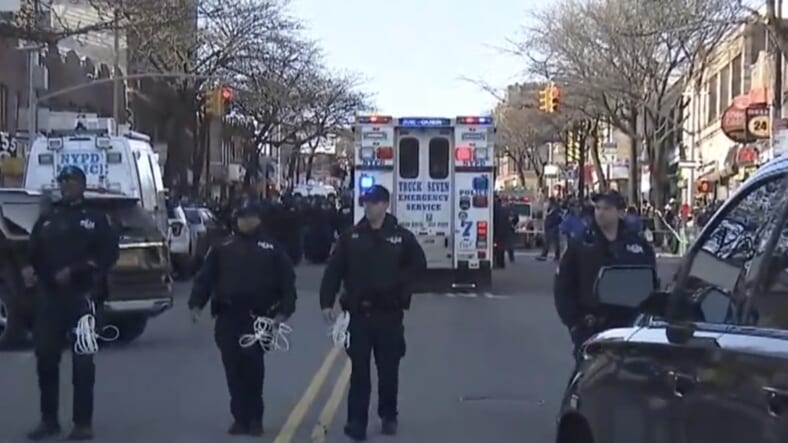 As the nation observed the 50th anniversary of the death of Martin Luther King, NYPD officers shot and killed a Black man on a Brooklyn street Wednesday afternoon. Police say they saw the man holding a metal object that turned out to be a pipe in his hand while taking a two-handed “shooting stance.”

The New York Daily News reports that officers responded at about 4:30 p.m., to calls of an emotionally disturbed Black man waving a gun on a corner of Brooklyn’s Crown Heights neighborhood.

When cops got there they found the man with the metal object. “The suspect then took a two-handed shooting stance and pointed an object at the approaching officers,” NYPD Chief of Department Terrence Monahan said at a press conference.

The chief described the object as “a pipe with some sort of knob,” which he held while standing near a small corner grocery store.

“I heard all these shots, I thought it was firecrackers at first. I turned around and you just see the cops standing over the guy,” a witness named Chris J. told the Daily News. “It was at least five shots. First it was one, then it was nonstop after that.”

The witness said a plainclothes officer handcuffed the motionless man lying on the sidewalk.

“Blood was everywhere,” Chris said. “They put him on his back and they tried to compress his chest but he was gone.”

READ MORE: Man shot by Chicago cops as a teen is awarded $1.2 million

Andre Wilson told the paper he’s known the unnamed victim for 20 years, describing him as a quirky neighborhood character.

“All he did was just walk around the neighborhood,” he said. “He speaks to himself, usually he has an orange bible or a rosary in his hand. He never had a problem with anyone.

“The officers from the neighborhood, they know him,” he added. “He has no issue with violence. Everybody just knows he’s just mentally challenged. This shouldn’t have happened at all.”

Shortly after the shooting, an angry crowd formed at the edge of the police tape shouting at police and pointing out the officer they believed to be responsible.

“The whole community came outside,” he added. “People were going crazy. It was a nightmare out there.”

The victim is known in the neighborhood for being emotionally disturbed. “He’s a little touched in the head,” Chris said. “But he’s not crazy enough to go around hitting people.”

The incident comes some 27 years after the Crown Heights neighborhood saw three days of racial unrest.

Vassel’s death is among several taking place at police hands in Brooklyn alone within the last few years. In 2014, Akai Gurley was shot and killed by rookie officer Peter Liang in a housing project in the East New York section. Liang was convicted, but sentenced to probation. In 2013, Kimani Gray was killed by a police officer’s bullet in the Flatbush section. No one was ever charged in that case.

The most high profile case in New York City in the past several years was the 2014 death of Eric Garner who succumbed to a police chokehold while being arrested for selling loose cigarettes on Staten Island. A grand jury decided not to charge Officer Daniel Pantaleo in Garner’s death. His daughter, Erica became an activist after the incident until her death in December.