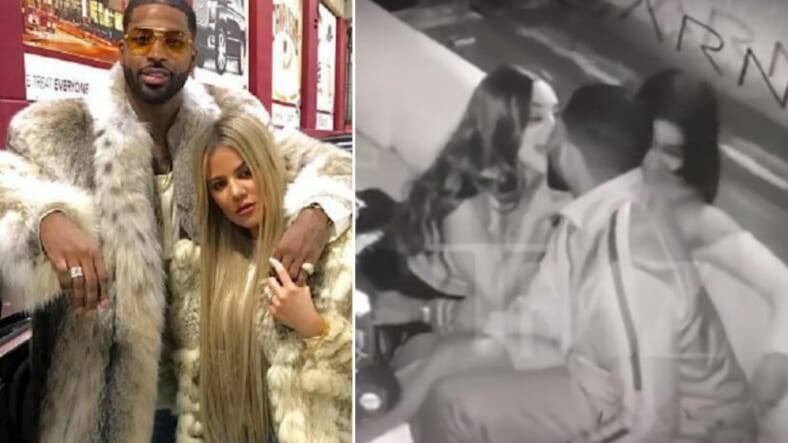 They say Karma is a beast, but I’m not sure I’d wish this kind of heartache on anyone.

Tuesday, footage was revealed by TMZ that shows Tristan Thompson very boldly cheating on Khloe Kardashian with two women back in October, when the “Keeping Up With The Kardashians” star was only 3 months pregnant.

The surveillance video was recorded on October 7, 2017 at a hookah lounge outside Washington D.C. In the clip you can pretty clearly make out a man who looks a lot like Tristan hanging out with 3 women, 2 of whom are fully engaged in some affectionate foreplay.

Tristan is making out with one of the women until her friend grabs his head and brings it to her chest so that he can motorboat her. She then proceeds to grabs his family jewels and…

Man, this is just awkward.

The incident allegedly took place the night before the Cleveland Cavaliers played the Washington Wizards.

Khloe is due to give birth to her first kid later this month. And because Tristan cheated on his pregnant girlfriend to be with Khloe a few years ago, Twitter is already aflutter with people pointing out that the 33-year-old is getting a taste of her own medicine.

Tristan Thompson only doing to khloe what him and khloe did to His ex Fiancé and babymoms Jordy. It’s called karma honey. Imagine actually feeling bad. pic.twitter.com/5qF9jskpK7

Tristan Thompson when his girlfriends hit they third trimester pic.twitter.com/1PdFzn7N9p

khloe kardashian lost tristan thompson the same way she got him pic.twitter.com/CDnz05iF5O