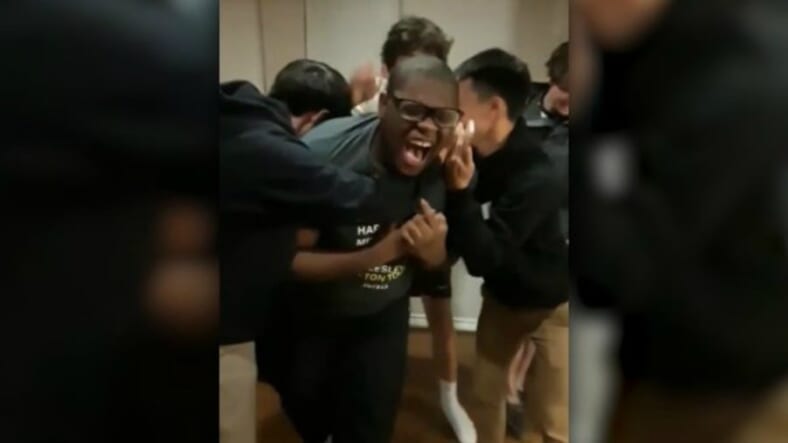 Michael Brown applied to 20 of the best universities in the US. He was admitted to every single one with a full ride and $260,000. (Photo courtesy of CNN)

We can’t win for trying.

Last week, high school student Micheal Brown made headlines after applying to 20 colleges and getting accepted into all of them, with each institution awarding him a full scholarship to sweeten the pot.

By anyone’s standards, this is a monumental achievement, and yet the anchors at Fox News still found a reason to be big mad.

After the video of Brown reacting to the life-changing moment went viral, Fox 5 DC morning co-anchor Holly Morris and contributor Sarah Fraser went in – on the student with 4.68 GPA – for having the audacity to think he could apply to 20 schools.

At one point, the duo even giggled while calling his decision to do so “obnoxious,” and going as far as to suggest the teen was showing off.

This is peak white privilege on full display folks. It’s also further proof that Fox News does not like, support, or believe in the power, fortitude, or propensity of Black people.

And these women are so drunk off of it they don’t even realize they’re literally mocking a black child for doing well in school.

Here's a new one: Local Fox anchors criticized this Black teen for working TOO hard pic.twitter.com/sIwyciCC9j

“It’s a little ridiculous that this kid applied to 20, taking away a spot and basically waitlisting another kid,” Fraser said.

“I’m urging my kids not to,” co-anchor Allison Seymour agreed.

“It’s a little obnoxious because you can only go to one, you can only take one full ride, and you are taking a spot from someone else who worked really hard,” Morris chimed.

Not surprisingly, the ladies immediately received backlash on social media after a Now This video recap of the Fox 5 segment went viral itself.

shame on these news anchors. he worked his entire life to achieve the impossible and instead of celebrating this extraordinary achievement they chose to call it ridiculous. Congratulations Michael Brown, the world needs more people like you – https://t.co/uXkhSwfTea

Congratulations ? Michael Brown Which ever #College You Choose will be Lucky to have you These #Fox #TalkingHeads Should Be #Fired https://t.co/uxhu7sQbh0

Check out @FoxNews anchors call a young black man, Michael Brown, “obnoxious” for applying to and getting accepted with full scholarships to 20 colleges.

Either we’re “lazy” and need to “work hard,” or we’re “obnoxious” when we excel for working hard.#Racist#SitDownAndShutUp pic.twitter.com/QWGPVVcdpD