Find out why they got shut down. 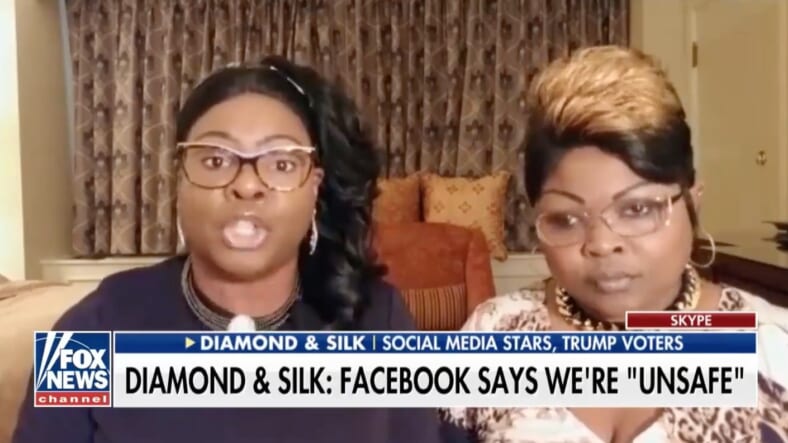 Viral court jesters Diamond and Silk are easily President Trump’s most vocal Black supporters and have made a name for themselves dancing for him and his administration.

Now these two claim their dubious political ties have led them to being unfairly targeted by Mark Zuckerberg… because he has nothing better to do this week.

Monday night, Cubic Zirconia and Polyester accused Facebook of discrimination after they said the social media site branded them as “unsafe to the community.”

Speaking with conservative Fox News host Laura Ingraham (you know the one who called LeBron James a “dumb jock” and said his elocution skills were “barely intelligible” and “ungrammatical”) on The Ingraham Angle, the ladies vented about their battle with the social media company after noticing a drop in engagement during September 2017.

“The straw was the other day when they wrote and said that they deem our content and our brand ‘unsafe to the community,’” she added.

The ladies believe they’re being targeted for their deep (and many argue delusional) love of and admiration for Donald Trump.

“When you say that you deem us ‘unsafe to the community’, what you’re saying is that we are a danger to our community,” Diamond said. “It’s offensive, it’s appalling, I look at this as discrimination …This is censorship. You are censoring our voices.”

Facebook has since rescinded their decision to classify the conservative firebrands as unsafe.

“We have communicated directly with Diamond and Silk about this issue. The message they received last week was inaccurate and not reflective of the way we communicate with our community and the people who run Pages on our platform,” a Facebook spokesperson said in a statement to Fox News.

Now that this appears to be resolved, we imagine these two will be back on Facebook and Fox News (the place where Black people come last…always) with the task of building up the President’s legitimacy and proclaiming his moral compass.