Black, trans, and banned from the military: Two soldiers tell their stories 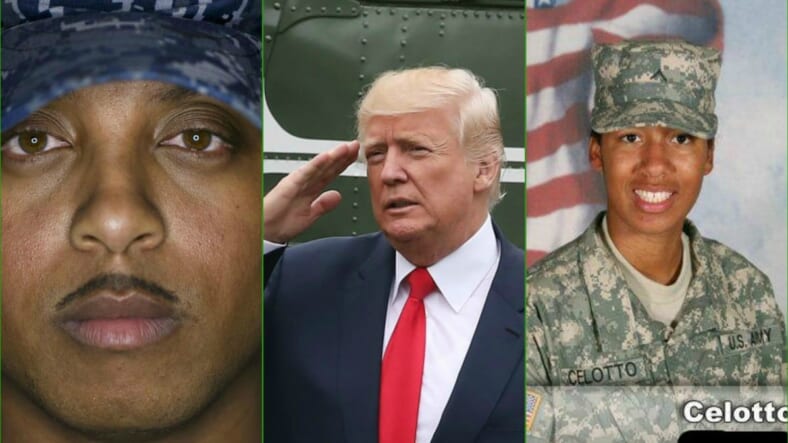 There are some 15,500 transgender officers serving in the military. The problem is many of them are not out and those who are came out after enlisting. The Trump administration recently made a second attempt at banning transgender military members with new guidelines stating:

“Transgender persons who require or have undergone gender transition are disqualified from military service…unless the Pentagon grants an exception.”

The original failed attempt came after a series of random tweets last September when President Trump announced he was instituting the ban for “cost reasons” despite evidence to the contrary. The military currently spends $84 million annually on erectile dysfunction medication, according to an analysis conducted by the Military Times. To be clear that’s 10 times the cost of what the military could be spending on gender and hormone therapy related medical care for transgender troops.

In October, a Federal judge blocked the ban calling it “unconstitutional,” a decision which continues to remain in effect despite the administrations recent attempts at blocking members for a second time.

These constant attempts follow other decisions made by this administration. Let me remind you when they tried to remove seven words from CDC funding, including the words “diversity” and “transgender,” which doesn’t help in humanizing this part of our population.

I recently spoke with two service members, one active and one a vet, both transgender. I wanted to get a full understanding of the real danger this challenge poses for one of the most marginalized and vulnerable communities in our country.

In 2016, President Obama lifted the ban on transgender members serving openly (before then they could serve, but not under their true identity.)

“Though I had transitioned many years prior to when the ban for open transgender service was initially lifted, I finally felt like I didn’t have to hide or try not to standout anymore, which is what I had done out of fear that I would be kicked out,” explained Petty Officer Second Class Taryn Mclean, a transgender man. “It was a relief to be able to finally feel such a simple bit of freedom most people don’t realize they have.”

A year later, Trumps tweets about reinstating the ban left Taryn, the military’s transgender community and the military in general feeling blindsided.

“It was a very clear indication that our presence wasn’t wanted only a year after finally being able to openly be ourselves. For many, it was also a chance to finally begin their transition because we had felt comfortable enough to do so,” said Taryn.

“It wasn’t fair for someone who hadn’t served, isn’t a doctor, and may not even personally know anyone transgender to use such a platform to make such bold statements regarding the military’s transgender community. There are more important things for him to worry about.”

Despite Taryn’s many years of service to this country, this ban puts his entire livelihood at stake. Living his life and loving his job, Taryn bought his first home over a year ago, finished a degree and has started working on another and is considering his choices for family planning. If he’s no longer allowed to proudly serve his country because he’s trans, where does that leave his future?

“It would break my heart and would do the military a real disservice as we are ready and willing to serve honorably,” said Taryn. “It would put me in a position where after dedicating years of my life with no retirement eligibility. I would end up career-less, which puts a lot in jeopardy including my plans for the future.”

Forced out of the service

I also spoke Bryce Celotto, a transgender vet who was initially quite upset by the ban, but not at all surprised by it. After all, the LGBTQ+ community (particularly transgender people) has witnessed a long-standing pattern of attacks from the current presidential administration.

“I have friends who are openly trans and proudly still serve today,” said Bryce. “They show up to work every day, ready to go and do their jobs at the highest level. Transgender people are 100 percent capable and dedicated to serving our country just like our non-transgender colleagues.”

Bryce’s military career was however cut short when he was forced out due to his gender identity and the transition from female to male.  Although initially devastated, he was able to pick up the pieces and make an amazing transition into civilian life.

Since that time, Bryce has earned three degrees – including a Master’s Degree from Brown University – and is now a public-school teacher.

“If given the chance, I know that I still have a lot to offer the U.S. military. With my college education and experiences teaching, I would make a good officer, but with all the uncertainty around the trans ban right now, it is unclear if I would even be welcomed back.”

Transgender people are often targets of hate crimes, and attacks from legislation continue to endorse the violence many of them face in society. Taryn and Bryce have honorably served this country, only to watch it turn its back on them when the thing they needed most was support.

Transgender people are people—plain and simple. Taryn and Bryce are just two examples of hundreds of thousands of individuals who put country, justice, and sacrifice above all. Why should gender identity get in the way of their patriotic beliefs?

“We work hard, if not harder than others, because we HAVE to prove each and every day that we are worth our humanity,” said Bryce. “Transgender people are not a burden to U.S. military readiness, in fact we are an asset.”

Taryn, who currently serves, takes it back to the fundamentals.

“There are many things that the military has covered for some time and providing treatment to the trans military community is no different from say breast augmentation, Lasik eye surgery or a prescription for Viagra or Xanax,” said Taryn.

“Don’t let the numbers and figures distract you from recognizing blatant discriminatory policies. There was a point in time when there was a military ban for people of color, women, and the gay and lesbian communities.”

It’s important to remember that if we are not changing, then we are standing still. Hopefully, the ban will be blocked permanently, and America will get onto the right side of history.