8 OMG STFU moments as we say goodbye to Olivia Pope, B613 and the end of a ‘Scandal’ full era

Some of the most legendary moments from the past seven seasons.

The cast of Scandal (Courtesy of ABC)

“Scandal” doesn’t have its name for nothing.

Premiering on April 5, 2012, the series focuses on white-coat-wearing Olivia Pope, played by Kerry Washington, as the in-demand D.C. fixer. This opportunity made Washington the first Black woman  to headline a network TV drama since 1974. That Black girl magic was looong overdue.) The show was one of the first to also boast a refreshingly diverse cast along with frenetic plotting, rapid-fire dialogue, and a myriad of crazy moments that made you want to run to your Twitter account and divulge all your innermost feelings to the world before actually telling your friends, coworkers, and really anyone who’d listen.

As we wait to see how the series ends tonight (popcorn and red wine in hand), we’re looking back on the biggest, boldest, most off-the-chain moments from the show’s seven-season run.

In the premiere episode, we meet a young White House aide who, come to find out, is in a secret relationship with (a very married) President Fitzgerald “Fitz” Grant. And, as if that wasn’t enough tea for the party, Fitz later tells Olivia he loves her and seals it with a kiss. Many episodes later, their hands-on policy is practically NBD, but early on? OMG, this first kiss is like watching an intimate moment between Jay-Z and Beyonce.

Here, Fitz believes he’s merely showing up at his fancy birthday party. Instead, after he steps out of the car, we hear a bang and his head snaps back suddenly. The episode abruptly ends—and we have no idea if he survives. Damn,”Scandal” writers. Thanks for the heart palpitations.

While O.P. and company track “the mole,” Jake Ballard has been meeting with his mysterious and nefarious boss to plot their next move. Season 2 closes with Olivia trying to escape reporters, asking if she’s “the President’s mistress.” She slides into a waiting car and is suddenly across from the once-mysterious man in those (green-screened) park scenes.

“Hello, Olivia,” he says calmly. And she responds: “Dad?”

Wait, whaaat?!? Shonda, girl, this left us hanging all spring and summer. 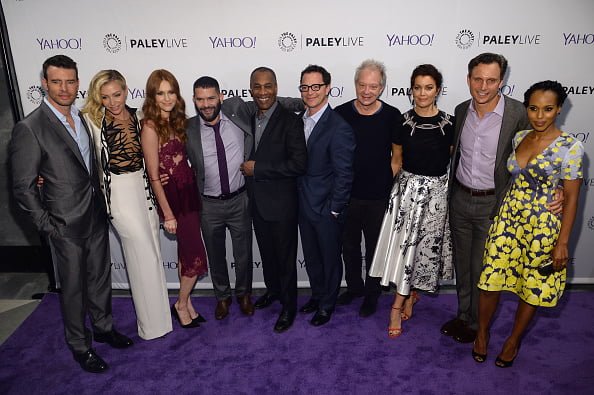 It happens during an episode full of craziness—including a church explosion and Quinn and Huck doing it in the office (collective eww). As Fitz is on the verge of losing his bid for reelection, and while he speaks to his supporters, his son Jerry collapses. Fitz carries his son out, but Jerry dies of what we later learn is a unique strain of bacterial meningitis. What did we learn from this episode? Even kids aren’t safe on this show.

Fitz goes on to win the election (hey there, sympathy vote), but Jerry’s death is super unexpected.

Olivia and Jake are about to have sexy time on her piano (a spot she’s “never” tried before, wink wink), but then she suddenly disappears while Jake steps away to fetch a pillow and blanket. All that remains is Olivia’s overturned wine glass leaving a red stain spread across her sofa. Wine has been wasted.

VP Andrew Nichols is responsible for Olivia’s kidnapping. He’s threatening to go public about his affair with Mellie Grant. He’s being held in a bunker and just CANNOT. Stop. Talking. He tears into Olivia, calling her a “slut” and more. Olivia, who some say was battling PTSD, completely snaps—violently beating Andrew to death.

She went there, ya’ll. Well, she and that chair went there…all the way there and back with no return trip needed.

Olivia has an abortion

This short scene airs when women’s reproductive rights are being challenged in real life. And some at the network reportedly wanted to cut it. In the final scene, Olivia is lying down with her feet in stirrups, wearing a medical gown, and her hair covered by a cap. She says nothing, yet we understand exactly what’s happening. It’s calm. Not sensationalized and the Internet responds.

Finishing the last days of his presidency, Fitz can’t become Command. But Olivia—she of the newly sleek hair and detached demeanor—can. Setting up the arc of Season 7, she takes control of the “underground fix any problem personal or worldwide,” B613, which she used to abhor.

“How does it feel to be the most powerful person in the world?” Cyrus asks.

It’s the perfect scene to remember for tonight’s final episode, which we presume will be Olivia’s last chance to ride off into the sunset, white hat and all.

Leslie Quander Wooldridge is a writer and editor based in Washington, DC. Find her on Twitter @lesliequander