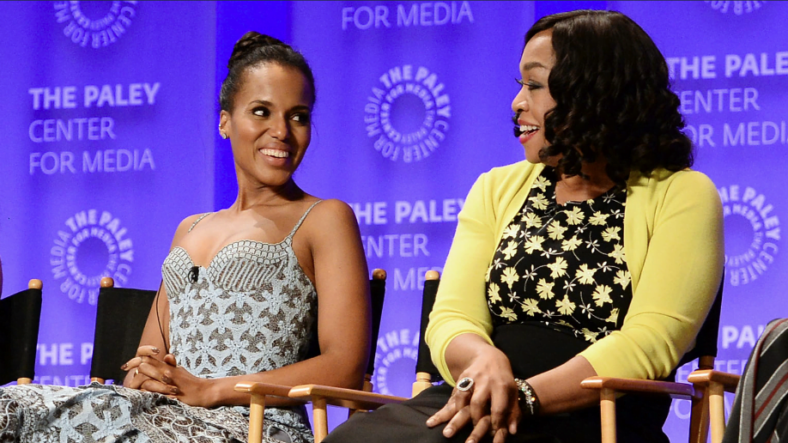 Gladiators – raise your bottles up and spill one out for the homies because Scandal has come to an end.

The popular ABC series that has played with our emotions and kept our Twitter fingers tweeting for seven seasons, has finally wrapped production and the cast took to social media to say their final farewells. Fans were filled with sadness, and some were exuding excitement over the show’s finality. The gladiators, as fans are affectionately known, sent heartfelt messages to the show’s creator Shonda Rhimes.

So Hard To Say Goodbye

“And that’s a wrap on #scandal. A lot of tears. A lot of love. Forever grateful for every second.” And she shared behind-the-scenes pictures of the set.

Kerry Washington, who plays Olivia Pope, the show’s most notable and most notorious character, posted a picture with cast member Tony Goldwyn, her Presidential boo. She simply captioned the pic:

And that’s a series wrap on #Scandal. Could not be prouder. Here is a shot of the Truman Balcony created by our amazing production crew. Thank you to every single person in our #scandalfam who helped bring this show to life. https://t.co/TRc5Xg3OXx pic.twitter.com/ujK0DsriYM

The final show will air April 19.

Trust, we’ll be posted up on our couches with tissue and red wine just waiting.

Scandal won’t be coming back after this season because showrunner Shonda Rhimes wants to go out on top.

ABC chief Channing Dungey explained the decision to end the show, saying, “To be honest, I had conversations with Shonda [Rhimes] where she has had, for a while, a sense of how she wanted the story to end. We sat and we talked and she said, ‘Look, I really feel like season 7 is where I want to wrap up this story because I always prefer to end a show where you’re feeling on top as opposed to letting things fizzle out.’ I do think that audiences, especially fans and Gladiators, who are as loyal to Scandal as they’ve been, are going to want the story to end in the way that Shonda intended to. That was a decision she felt really good about and we support wholeheartedly.”

Rhimes also released the following statement about the end of the show:

“Deciding how to end a show is easy. Deciding when to finish is quite simple when the end date is years away. But actually going through with it? Actually standing up to say: ‘This is it?’ Not so much. So, next year we are going all out. Leaving nothing on the table. Creating this world in celebration. We are going to handle the end the way we like to handle the important things in our Scandal family: all together, white hats on, gladiators running full speed over a cliff.”