OPINION: Meek Mill isn’t a political prisoner but he needs to advocate for them 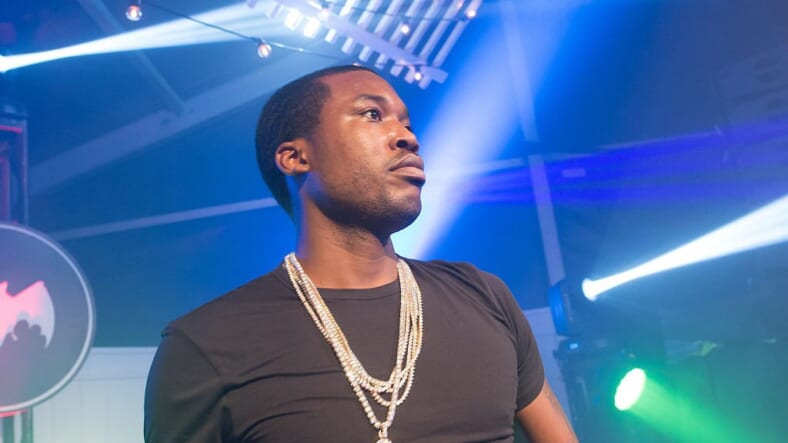 In a recent interview, jailed rapper Meek Mill told Page Six that he’s a “political prisoner” while pointing out the controversial circumstances surrounding his excessive and harsh sentence for violating his probation last year.

But a political prisoner?

A politicized prisoner whose story is a reflection of thousands of black and brown people that fall victim to systemic oppression?

But there are significant differences between the two and it’s important that both he and the collective we understand why Meek Mill is not a political prisoner.

–After Starbucks arrest, Rashon Nelson and Donte Robinson speak out: “We want to see true change”–

To be clear, Meek Mill is a victim of a broken criminal justice system that has targeted and over-penalized minorities for decades. He’s not the first, nor will he be the last. But because of his celebrity status, his imprisonment has been highly publicized with recent interviews with Don Lemon and Lester Holt. He has garnered a great deal of support from the community while also shedding light on the disproportionate amount of brothers and sisters locked up for nonviolent offenses.

However, Meek Mill framing himself as a political prisoner is deeply flawed and undermines the definition of what a political prisoner is—an individual who is arrested to suppress their political beliefs. Robert Rihmeek Williams was not targeted because of his political activity and beliefs like Huey P. Newton, Nelson Mandela, Martin Luther King Jr., Mohandas Gandhi, H. Rap Brown or Mumia Abu Jamal. This all started when a young man, who got caught up in the drug game, found himself on the wrong side of a criminal justice system that has habitually made an example out of black and brown people. Make no mistake, although the circumstances surrounding the 30-year-old’s imprisonment are contentious, there was some questionable judgment at hand that led to his current situation.

After being sentenced to an excessive 10-year probation for gun and drug charges from when he was an 18-year-old running the streets of Philadelphia, Mill managed to find success as a rapper and escape the streets. But trouble still managed to follow him. He was arrested in 2007 on charges that included drug possession and carrying a firearm without a license. After a brief jail stint, Mill violated his probation on several occasions.

Regardless of whether you agree or disagree with the circumstances surrounding his probation, the fact remains that he was given a decent amount of leeway before it all caught up to him. Unfortunately, there are people who weren’t given the opportunity to violate their probation numerous times.

However, he wasn’t targeted because he was a threat to systemic oppression and institutionalized racism. A fellow Philadelphia figure was, and Meek Mill would be wise to know the difference.

Mumia Abu Jamal didn’t release Dreams & Nightmares and is often forgotten about by a generation where activism is generated from the comfortable confines of social media. Unlike his rapping counterpart, Mumia wasn’t jailed for violating his probation nor does he stand to earn a substantial income as an entertainer if he is ever released from jail.

The former Black Panther whose activism is well documented has been incarcerated since 1981 for the murder of Philadelphia police officer Daniel Faulkner. He sat on death row for 30 years until his sentence was commuted to life imprisonment without parole in 2011 after numerous appeals questioning the quality of his trial, the mishandling of evidence and racial bias from the judge and jury. It is highly questionable if he had anything to do with the death of Faulkner, but he is destined take his last breath in jail regardless.

Mumia Abu Jamal wasn’t a target because he was a rapper, he was targeted because he was an activist who did real work in the community and deemed a threat by a racist system that wanted nothing more than to take revolutionary minds off the street.

Why is this mischaracterization so significant? Because if Meek Mill recognizes that he’s just a cog in the system and that true political prisoners remain behind bars, perhaps he will take an active role in rallying behind them like others have for him. The worst thing he can do is label himself as a political prisoner, mislead the public, be freed because of the support he received by the likes of Jay-Z, New England Patriots owner Robert Kraft, Philadelphia 76ers co-owner Michael Rubin and others, hop in his expensive car and never look back. It’s not the first time a celebrity has left jail and done little to nothing afterward. But Meek Mill can be a prominent voice as the current poster boy for prison reform in an uncomfortable political climate and use the most popular music genre in the world to bring attention to the real political prisoners, like Mumia Abu-Jamal.

There’s a difference between T.I. and Lil Wayne when it comes to using their platform to bring about awareness after being incarcerated.

Which side will Meek Mill fall on?

Andreas Hale is a freelance writer who has contributed to The Root, Billboard, MTV, OZY and Yahoo. You can find him on Twitter @AndreasHale