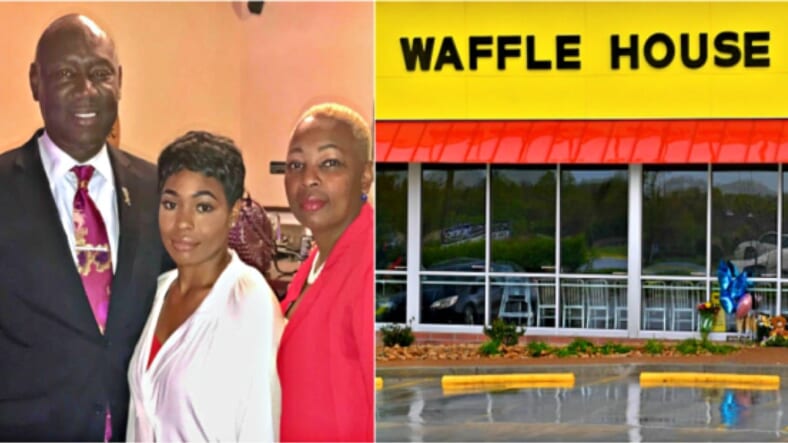 Attorney Ben Crump stands with Chikesia Clemons, center, and her mother on Wednesday, April 25, 2018, in Mobile, Ala. (Courtesy of Ben Crump Law) and Waffle House (Photo by Jason Davis/Getty Images)

In the cell phone footage, officers can be seen choking Clemons at a Waffle House restaurant and doing nothing to shield her exposed breasts as her strapless dress became undone in the scuffle.

Clemons can be heard pleading, asking officers, what she did she do wrong. In turn, one officer can be heard threatening to break her arm if she didn’t comply with his commands. Her only crime—asking for plastic utensils in order to eat a take-out meal.

The trauma of that night has left Clemons shaken to her core. In an exclusive interview with theGrio, Chikesia Clemons speaks out for the first time about her violent arrest and how she’s coping with the emotional humiliation and physical assault she experienced just a few days ago.

“It has been so hard for me. I have been in pain. I can’t eat. I can’t sleep. In fact, I haven’t really slept since the night it happened. I have bruises all over,” said Clemons, during our telephone interview from her home in Mobile. “I’m grateful for the support of my family and Mr. Crump. I’m constantly breaking down and crying. I have a six-year old daughter. She sees me crying and then she starts to cry.”

READ MORE: After police brutally arrest Chikesia Clemons at Waffle House where is the outrage for Black women?

Clemons, who has retained the services of famed Civil Right attorney Benjamin Crump, is unable to speak directly about the incident until the criminal charges against her —disorderly conduct and resisting arrest—are settled. Crump held a press conference in Mobile on Wednesday to address the arrest and present two, new eyewitness accounts that contradict what the Saraland police have presented.

Crump is no stranger to these types of high-profile, racially tinged cases. He has represented the family of Trayvon Martin and is currently also representing the family of Stephon Clark, the young, Black man who was shot and killed by Sacramento police officers in his grandmother’s backyard last month. He can hand-pick any case he wants to take on, but he tells theGrio that Chikesia Clemons’ case was particularly important to him.

“I thought about the women in my life. This could have been my wife, my sisters, my nieces, my cousins. I literally watched that video and thought, this could have easily been any of the women who I love most in this world,” said Crump.

“Women are disrespected so often. And, these officers assaulted her, threatened her, choked her, and exposed her with no evidence whatsoever.  They give young, white men who are confirmed murderers more respect and consideration than they did for this unarmed Black woman. This is a beautiful young sister, a mother, and she has been going through it. If we don’t stand up for this young sister, then shame on us all.”

Both the Waffle House and the Saraland Police department stand by the arrest and say that the video does not represent the full story. The Police Department has since released a portion of a 911 call and some footage from a security camera inside the Waffle House that night.

According to their accounts, a Waffle House employee called the police because two women and a man appeared to be “drunk and disorderly,” had arrived into the restaurant with alcohol, and were yelling at the wait staff.

Clemons and her friend Canita Adams (who took the original cellphone footage seen below), were reportedly arguing with the employees because they were asked to pay an additional fee for plastic utensils, which are normally free. Both women have said that they were confused by this request since they had eaten at the same restaurant the night before and were not charged. When Clemons refused, she asked to speak to the manager and then asked for a number for the restaurant’s corporate office to file a complaint.

Instead, the police were called.

Crump has acquired sworn statements from two eyewitnesses who were there in the restaurant that Sunday morning. Both women, who are white, say that the police got it all wrong.

“The waitress told the lady in white that she needed to leave because she was not serving her. The lady who was arrested got her friend to go outside and was trying to de-escalate the situation. There was no mention of alcohol being brought into the restaurant nor any mention of a gun or any type of weapon,” said Mandy Sullivan in her statement.

After the police arrived, Sullivan said that both Clemons and Adams were trying to explain what happened earlier, but the officer was talking over them and not listening.  According to Sullivan’s statement, the cops went after Clemons immediately.

While the Saraland Police Department maintains that race played no role in their arrest, Crump believes the imagery of three white, male police officers tackling Clemons, exposing her breasts, choking her and threatening to break her arm, says otherwise.

David Smith, president of the local NAACP chapter, is planning a town hall meeting at the Cedar Street Baptist Church in Saraland today. The group stands in support of Clemons and has already began protesting outside the Waffle House where the violent arrest occurred. There have also been calls to boycott the popular chain as other stories of discrimination begin to surface.

“I believe the Saraland Police Department has a lot to account for,” said Smith to WKRG. “What if she had hit her head when she was thrown to the ground. We’d be looking at a whole different event now.”

Representatives from the Waffle House have yet to reach out to attorney Benjamin Crump to discuss the incident and the Saraland Police Department has not released the names of the three officers who violently arrested Clemons.

And, while Saraland Police Department has stated they have no plans to discipline the officers, Crump says the power lies with the people to right this wrong for Chikesia Clemons.

“If you care about Black women, you need to fill their inbox and tell Waffle House that this is unacceptable,” said Crump. “This all started because their waitress, who is their representative, discriminated against these young, Black people. We have to say that we will take our business elsewhere and refuse to give you our hard-earned money and allow you to treat our women like this.”