Has Earn ever had a good day? 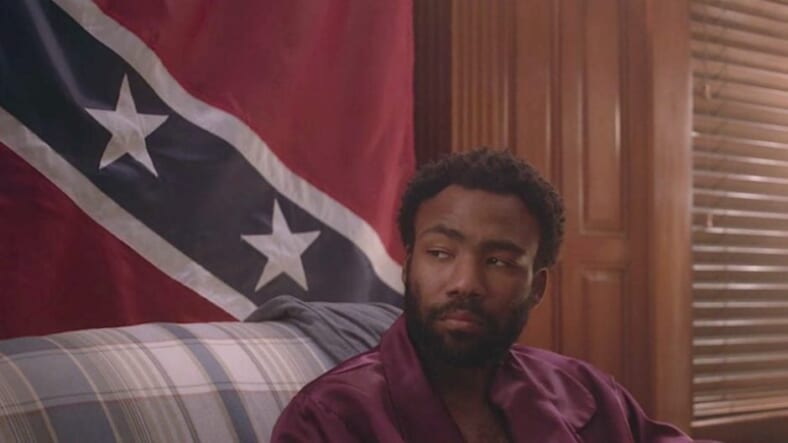 Earn’s well-intended-yet-tragic managerial decisions had to catch up with him at some point. “North of the Border” is the episode for it.

Still healing from the ass-whipping he took in last week’s episode, Al (Brian Tyree Henry) and Earn are packing up to do an out-of-town college campus show. There’s light tension between the two men based on the fact that Earn booked him a free show; he sees the money coming down the line, Al wants the money now.

Tracy (Khris Davis) makes a hilarious appearance, almost gets shot, and finagles himself a place on the trip as Al’s “bodyguard,” which clearly rubs Earn the wrong way. Al finds out that Earn didn’t even book him a proper hotel, but instead is having him stay with an Instagram chick named Violet Jenkins (Jerusha Cavazos), who apparently has a crush on Paper Boi and a roommate with industry connects. Earn’s trying to save money, but Al’s course-correction from last week hasn’t stopped him from sniffing out the bullshit.

When the crew arrive at what looks like standard off-campus college housing, Violet gets sensual with Al immediately. She invites him to sleep with her on her bed but, though she’s fine, Al’s head is on the swivel. Sure enough, Violet said she knew they were connected when she had a dream about eating him. Like, actually eating his flesh. Al sees a footprint on the ceiling because…why not?

At the pajama jam where Paper Boi and Clark County (RJ Walker) are performing, Al encounters a student who says she’s writing a paper on him – something he would’ve been dismissive of before but appears to embrace. It seems those woods really kicked in…even Darius and Earn comment on it.

Because everything can’t be simple, Tracy is taking his job as bodyguard a bit too seriously. When Violet dumps her drink on Al because he’s talking to other girls, Tracy confronts the woman, even as Earn tries to diffuse the situation.

Tracy is an ex-con hood n—a with minimal boundaries, so he pushes the girl’s face and she falls down the stairs in slow-motion, which would’ve ended horribly had Earn not caught her. Alas, she slaps the shit out of Earn anyway.

The situation gets even more tense when Violet’s brother comes after the four men as they attempt to leave. Earn tries to speak to them on some kumbaya shit but Tracy comes from out of nowhere, rocks the brother to the ground and tells everyone to run. Yet another example of poor Earn management.

READ MORE: What to do with Kanye’s sunken place tweets and dope music
READ MORE: 5 Ways Meek Mill can stay out of prison

Because ride shares seriously don’t seem to exist in Atlanta, we’re greeted to another montage of men walking up the street in defeat, only this time in colorful silk pajamas. As they duck away from the road thinking they’re hiding from cops (just campus security), they wind up near a white frat house, where they smell the weed that Al desperately desires.

The white boys recognize Paper Boi immediately and take him in. They wind up in a room with several pledges, all stark-ass naked, arms tied up, with potato sacks over their heads (do I need to tell you their color?) as they sit in front of the hugest Confederate flag ever made.

Darius and Tracy bond with a frat member over the rack of guns on the wall and find out they have a room full of guns, antique and otherwise. Clearly, no Black frat house in the South could get away with having guns just chillin’ on the wall in a main room. When those two dip off to check out the gun room, Al finally gives Earn a Come to Jesus talk about his shitty managerial practices, and essentially fires him.

Earn and Al wind up in the room with a frat boy who claims that Paper Boi and Post Malone are his favorite rappers. In what is easily the most WTF sequence in a season full of them, the naked white pledges all end up dancing to D4L’s 2005 hit “Laffy Taffy.” This episode, the fellas bonded far better with the white college students than they did the Black ones.

The fellas return back to their “lodging” the next day to find that Violet damaged their vehicle and threw all of their clothing out on the lawn, but not before cutting it all to shreds. Earn finds that his laptop is missing, leading him to truly lose his shit for the first time in the whole series. He pulls the fire alarm and kicks at the door…actions that cause tension in the viewer because it’s guaranteed to get them all thrown in jail.

Since Tracy seems to be the main party amused by everyone’s bad luck, he gets under Earn’s skin to the extent that he makes Al pull over the car on a highway to fight Tracy. You don’t even need to pay attention to their size difference to know how that fight goes. It’s another example of how the show punishes Earn for his horrible decision making and tendency to blame everyone but himself.