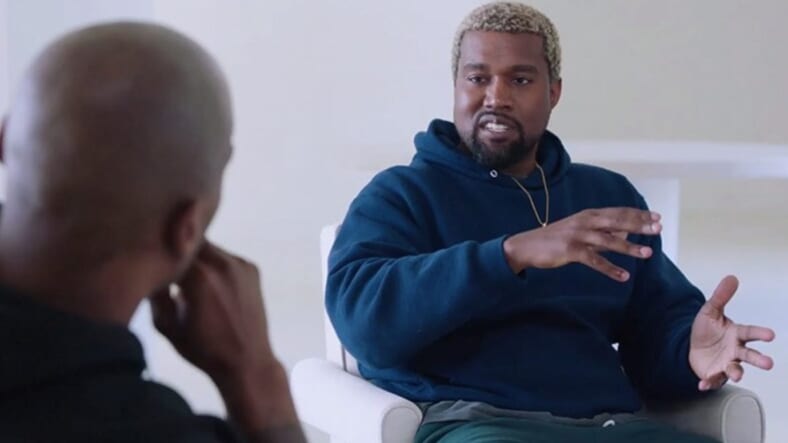 Please, allow me to address those of you who are still willing to die on the hill of the Artist Formerly Known as Ye:

Kanye West is not a philosopher king.

Kanye West is not a marketing genius.

In fact, Kanye West is proving he might not be any kind of genius at all.

By siding with a White House administration led by a man who denigrates marginalized groups, calls African countries sh*tholes, tells “The Blacks” they have nothing to lose and daily finds ways to deny people of color their humanity, the 40-year-old rapper has officially boarded the metaphorical “Spaceship” he spoke of on “The College Dropout.”

If you didn’t believe that was the case when West proudly showed off a hideous, “autographed” MAGA hat and basked in the glow of The Donald’s head petting, you should believe it after his most recent idiotic statements on slavery. Statements that West doubled down on late Tuesday night, despite the heroic opposition efforts of TMZ staffer Van Lathan.

“We need to have open discussions and ideas on unsettled pain,” West tweeted after having been dragged to the edge of the Earth for startling comments about our ancestors. In his mind, I guess they supposedly forgot to opt out of centuries of extended degradation, backbreaking labor, physical torture and death.

“To make myself clear. Of course I know that slaves did not get shackled and put on a boat by free will. My point is for us to have stayed in that position even though the numbers were on our side means that we were mentally enslaved,” he further tweeted.

Any of you lingering West fans who would dare to say you understand his (and allegedly, Killmonger’s) point, I challenge you to stop your “Django Unchained” level day-dreaming and consider that this man openly admits that he does not read. And unless the spaceship he once poignantly rapped about takes him back in time to a plantation where he would try to escape from human servitude, he has little to no idea what he’s talking about.

But simply because he can rap, produce and pun like few others, it appears some of you are ready to excuse his glaring lack of insight and damaging revisionist history in a Twitter tirade.  In fact, those who haven’t quite embraced his “fake news” version of American slavery, are taking the theory in another dangerous direction.

You are suggesting that this man has reached peak marketing genius.

To paraphrase Mr. “Late Registration” himself: “How Sway?”

Marketing genius is going head to head against 50 Cent in a same-day album release to demonstrate the staying power of his musical voice.

Marketing genius is flowing flawlessly with his jaw wired shut to prove to the world, and frenemy Jay-Z, that he was more than just a Windy City producer with sped-up soul samples.

Marketing genius is flipping his music domination into the sneaker and fashion worlds, even though said fashion often resembles mummy costumes from Party City.

Since when does a talent like Kanye West have to hit Dr. Evil-level of trolling to attract attention? After all, when he returned to Twitter last week with some simple “MotivationMonday quips, folks dutifully plastered their timelines with his wisdom and exalted his re-emergence online.

He doesn’t need to be cruel, callous and as TMZ’s Lathan pointed out “disrespectful” to a large swath of his fan base in order to get streams percolating. He knows this, as he obnoxiously demonstrated by releasing a song with the actual lyrics of: “Poopty scoopty/Scoopty whoop.”

This ugliness and attention-seeking is not coming out of need. It seems to be coming out of want, and the “why” behind that desire is not one we can divine from Twitter tea leaves.

We can’t anoint him with virtual holy oil or remote diagnose him with unresolved trauma. Charlamagne Tha God, Ebro and TMZ can’t “interview” him out of this free-thinking free fall.

Damn near every day, we wake up to find more grainy body camera or mobile video footage of Black bodies being brutalized by police enforcement.  We are being arrested for asking for complimentary plastic cutlery in the Waffle House, sitting two minutes too long in a Starbucks, or in this recent case,  taking up too much space on a plane.

A former surgeon who looks just like us is sitting at 45’s elbow, trying to find more ways to drown us in a poverty that is already disproportionate. Any gains we made in fighting a justice system steeped in White supremacy seem to be vanishing under a White House (ahem) leader that once suggested that police officers be even more abusive to suspects, I repeat, suspects in crime.

We’ve got many more concrete issues to contend with, and ones that stem directly from the slavery Mr. West thinks was some sort of optional arrangement. It’s time to admit that we cannot recover the Chicago MC from the deepest dreamless recesses of the Sunken Place. And it’s even more important that we stop trying.

To conclude his most recent rant, West tweeted: “They cut our tongues so we couldn’t communicate to each other. I will not allow my tongue to be cut.”

That is indeed his right, just as it is ours not to have our ears and minds corrupted with his rambling, elitist ignorance of our ancestors’ struggle.  So while West keeps spiraling from the comforts of Calabasas, let’s unfollow him, put him in the rearview and keep rolling.

That spaceship has finally taken Kanye away.

Kyra Kyles is a multiplatform media executive, author, and speaker on media diversity.  In addition to her 20-plus years as a journalist, including a tenure as Editor-in-Chief of EBONY and a multimedia correspondent/columnist for the Tribune Company, the Chicago-based co-founder of Myth Lab Entertainment is a filmmaker who co-produced/wrote/directed “Human Resources Season 2: Cubicle Creepshow,”a Web series that explores what happens when workplace horror stories meet monster movie classics. Follow Kyra @thekylesfiles on Instagram, Facebook, and Twitter.