Feminist Amber J. Phillips on American Airlines police incident: ‘I expect my fatness and my Blackness to be held together with dignity’ 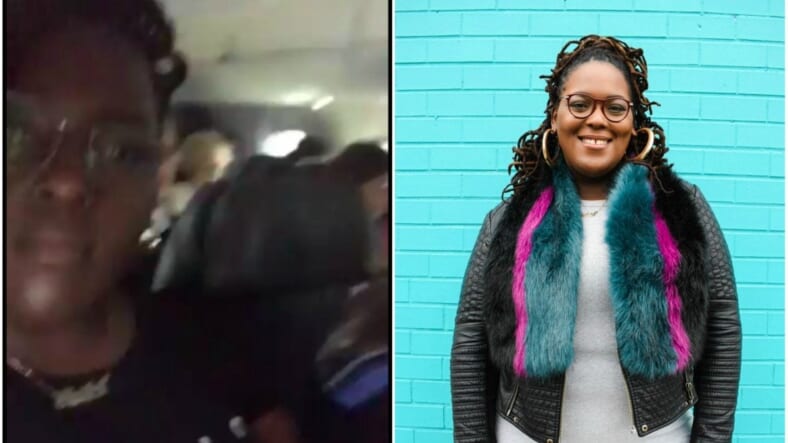 Writer and activist Amber J. Phillips documented on Twitter a disturbing incident she recently endured on an American Airlines flight.

The 28-year-old was on a short, 45-minute commuter flight from North Carolina to D.C. when she found herself in close quarters with her white, female seatmate. According to Phillips, the woman repeatedly moved Phillips’ arm, pushing her into the window and also demanded that Phillips move so as not to touch her.

“This was all before take-off. In my heart I know this woman was trying to get me kicked off the plane,” said Phillips in an exclusive interview with theGrio.

I’m tired but in the morning, I’ll tell you all how a white woman @AmericanAir flight attendant called the cops on me bc I made the white woman siting next to me uncomfortable bc my arm was touching hers on flight AA5580. The cops were called on me for flying while fat & Black. pic.twitter.com/9vc0PoFbX4

This white woman literally spent the entire 45 minute flight making an active scene bc my arm was touching hers. Loudly asking if I could “move over” on a plane so small everyone’s carryon bags had to be valeted. It was awful!

When I decided to take a picture & video to document the incident, I deplaned, picked up my bag, and boarded the shuttle. While I’m on the shuttle, this woman LIED that I assaulted her and the @AmericanAir flight attendant called the cops to remove me from the shuttle bus. pic.twitter.com/czMyxkQVQ7

After Phillips videoed her seatmate, she made her way to the airport shuttle, but police officers met her there and forced Phillips off the shuttle to question her about the woman’s assault allegations.

Phillips says that after an uncomfortable interaction with the police, she left the airport with no arrest, no charges, but also no apologies. It was a chilling experience for her as she imagined the many different ways that her story could have ended.

American Airlines customer service representatives have yet to reach out to Phillips, or vice-versa, to discuss the incident.

Being Fat and Black with Dignity

Phillips, who is 5’10 and describes herself as having a “fat Black body,” believes it was her race as well as her size that made her a target in this situation.

“I know for sure this happens to people all the time. My friends and I talk about the anxiety we feel when we fly. Who sits next to you determines if it will be a pleasant experience or an awful experience. Does the person sitting next to me automatically hate me because of my size, race, or gender?” asks Phillips. “I have a right to be in this world. Body shaming doesn’t stop and start at my clothing options.”

READ MORE: Dear Black Men: You cannot and will not cancel Issa Rae for telling her truth

“We have this view that people of a certain size are an inconvenience in public spaces. But, the reality is that 67 percent of women in this country are over a size 12. Most women are built like me,” continues Phillips.

“I expect my fatness and my Blackness to be held together with dignity in every space I occupy. We deserve to exist and have dignity. American Airlines failed me in that regard.”

Bigger Than the Moment

Phillips says that having the police called on her for an annoying, but ultimately innocuous interaction is par for the course in today’s environment when any perceived slight by a Black person is cause for a 9-1-1 call.

“White folks are using literally any excuse to get police involved and that puts Black bodies in danger. They call the cops on Black folks like it’s their personal customer service,” says Phillips. “When Sandra Bland died in police custody, people started the #IfIDieInPoliceCustody hashtag and I said at the time that I want people to fight for me. I didn’t die, so now I fight.”

After sharing her ordeal on Twitter, Phillips has received a number of encouraging messages from online supporters, but she has also seen her share of backlash. She calls this corner of Black social media “small.”

Phillips is an outspoken writer who typically tackles issues related to feminism, womanism, racism, and misogynoir. Her comments last year about the #MeToo Movement on Roland Martin’s “News One Now” caused waves at the time. When talking about Black men, she said “all of you can and have probably raped or caused harm.” She also said that intimate partner violence is the second leading cause of death for Black women aged 15-35 and cited the American Bar Association as her source for that statistic.

Comments like that put her in the crosshairs of certain segments of the Twitterverse and they came out swinging in time for this latest incident that has landed her in the headlines.

Amber Phillips also said that ALL BLACK MEN are involved in rape culture. Now I don’t agree with what the white woman did however ,I’m not going to rally behind a coon siding with female white supremacist such as Amber Phillips pic.twitter.com/m5FHQb9JIH

Without identifying a particular tweet or person, Phillips tearfully acknowledged that she was hurt by the online comments.

“I just learned of those comments last night. It scared me and it hurts. After these Hotep types commented about me, I got a text from an unknown number,” shares Phillips. “They weren’t exactly threats, but more like insults about me and my weight. Just absurd. I’m working with an organization to protect my security and to make sure my personal information is offline. I’m also consulting with therapists to make sure my mind is right. I will fight this.”

Phillips goes on to explain her stance on Black men and feminism.

“But they (the false Black power prophets) are tools of white supremacy and I know that because for one, you can’t be about Black liberation and then hate Black women or consistently dismiss our stories and our pain,’ explains Phillips.

“I know they are tools of white supremacy because they stand for the same things: anti-Black woman, anti-LGBT, anti-the people in our communities who regularly sacrifice for Black liberation in a cohesive sense.”

Phillips has not yet decided what she will do about the American Airlines incident, but she vows to keep fighting for intersectional visibility.