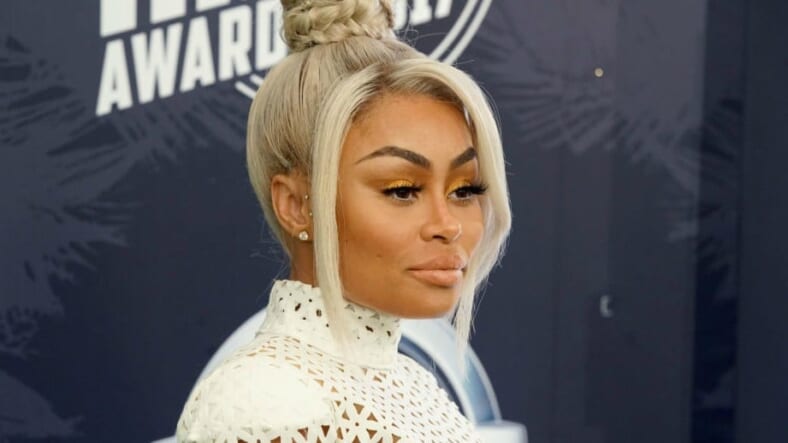 Not being tethered to Rob Kardashian’s name may be putting a strain on Blac Chyna’s purse strings.

According to the Daily Mail, the reality star’s light is dimming and club promoters aren’t finding her profitable enough to pay her Kardashian-level dollars anymore. Chyna was making upwards of $30,000 for club appearances when she was with her fiancé Rob. TMZ reports that she’s only securing the bag for $7,000 per appearance now.

In fact, one Miami promoter allegedly said he won’t hire the former stripper for more than $2,000 bucks. While Chyna doesn’t dance anymore, it sounds like her money moves are being stifled.

Her own worst enemy?

Chyna may be bringing these money problems on herself though since her bad girl rep is rubbing people the wrong way.

Last month, she made headlines for getting into a brawl at Six Flags and tried to bust a fan in the head with a stroller for touching her daughter Dream.

She later posted an ad promoting “glass blunts” on Instagram.

“Idgaf but I’m gonna chill tonight with @GlassBluntStore and go all the all the way up,” she said.

Chyna is also fighting with the Kardashians and believe they are collectively trying to block her cashflow.

She filed a lawsuit against the E! Network claiming that Rob Kardashian interfered with the airing of the second season of their reality show Rob & Chyna. In court docs Chyna said that Kardashian personally asked that the show be cancelled in the middle of filming the second season.

The lawsuit states: “Reality television thrives on colorful personalities engaging in conflict. If anything, the E! network saw more potential in a second season given the success of season one and the new, unpredictable co-parenting relationship between Chyna and Rob.”

Since Kylie Jenner’s show Life of Kylie took up the timeslot of Chyna’s E!, she’s asking for the same amount of money Kylie was paid for her reality series. Chyna believes she’s owed that cash since her Rob & Chyna series was cancelled and Kylie’s show took her spot.

According to The Blast, court documents filed by Chyna states:

“The money paid to defendants for their services on Life of Kylie was acquired through the unlawful means of intentionally interfering with her contract for a second season of ‘Rob & Chyna.”

Chyna believes the whole Kardashian clique is trying to take her down and destroy her career. And frankly it might be working.

READ MORE: Kardashian Kurse: 10 examples that prove Black people should stay away from the Kardashians

The documents further state: “The unwritten rule no one told (her) when she began her relationship with Kardashian is that the entire family will come after you if you leave, using their fame, wealth and power to take you down, including getting your television show cancelled (despite great ratings), spreading lies about you, and even funding a bogus lawsuit about a crumbled gingerbread house.”

Chyna is currently dating teen YBN Almighty Jay and it’s rumored that she’s pregnant. This would be the third child for Blac Chyna, who shares a 5-year-old son, Cairo, with Tyga and a 15-month-old daughter, Dream, with Rob Kardashian.

READ MORE: Jada finally admits to dating Will before his divorce