This Is America: 5 powerful messages that will stay with you long after your Donald Glover hangover

It all stunned me silent. 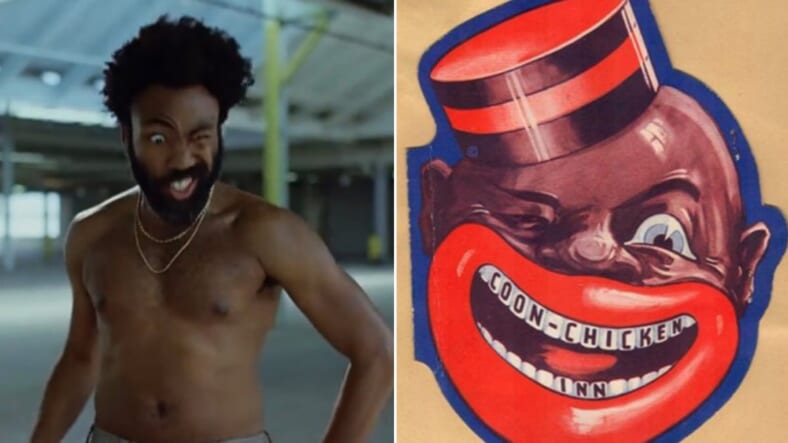 I was about to head out to the airport on Sunday when a 60 second clip of Donald Glover‘s This Is America popped up on my timeline. I’d missed his SNL appearance the night before due to Cinco De Mayo festivities and planned to watch it as soon as I got home. But, the freeze frame of a shirtless Donald looked like one of those digital video spoofs that made Saturday Night Live infamous.

There was a smile already creeping up in the corners of my mouth when I hit play, in full anticipation of some sort of clever satire starring the Atlanta star.

What I saw for the next minute was indeed satire, but it definitely was not funny. The creepy smile on Glovers face, the jovial dance moves juxtaposed next to the disturbing images flashing across the background… it all stunned me silent.

By the time I actually made it to the airport, I’d watched the video three times and had moved on to reading other people’s reactions on social media. When my Lyft driver tried to make small talk, I mumbled, “Childish Gambino” (Glover’s alter ego who stars in the clip) and waved my hand dismissively as I continued frowning at my screen in concentration.

I’m inclined to believe that I’m not the only one who gorged on this masterpiece of symbolism last night. Staring at freeze frames, reading thought provoking guesses and attempts at analysis, pausing to look out the window and wonder, “When the hell did he have time to do all this?”

Today is the Monday after and it’s time we put aside the collective hangover we’ve experienced from our Childish Gambino indulge over the weekend so that we can fully ingest the key points he laid bare for us to witness.

Below are the five most important takeaways you may have missed (or are still chewing on) from This Is America.

1. Jim Crow in the present tense

On first viewing, Glover’s poses and facial expressions come off weird and a bit creepy, but something about them also felt eerily familiar. That’s when it hit me, “Omg he’s re-enacting a minstrel show!”

As someone whose written pretty extensively about the Jim Crow era, those images are burned in my brain and it appears Glover is also keenly aware of the dehumanizing, grotesque and cartoonish way Black people used to be portrayed to white audiences.

But when that infamous minstrel stance is so seamlessly integrated with various viral dances (that it takes you a moment to even note the difference), suddenly the message becomes clear.

Maybe the minstrel show was never really cancelled, and coonery just found a way to hide in plain sight.

I’m not one of those super “woke” people who judges every shred of Black happiness as a distraction. We NEED joy, we need dance, we need all the rich and beautiful things that make our culture so unique to be celebrated. I would even go so far to say that Black liberation without Black joy is a pretty hollow victory. Video clips of jubilant children dancing – on their own – will never be a bad thing in my eyes.

However, have you noticed how those videos are used?

The way every time an atrocity happens suddenly a clip of some kids at a charter school doing the Milly Rock becomes viral and gets more attention than a Black child of the same age being murdered by police?

They painted grotesque smiles on our faces back in the day, and one could argue the media still does that now. Our mastery of artistic expression is still being exploited, but this time not only for entertainment value, its also being used to make us think we have more power than we really do.

VIDEO: White woman calls police on Black women checking out of Airbnb because they didn’t wave at her

And like Glover, we’re even willing to lose our shirts (and perhaps our dignity) to keep that machine fed.

This is the kind of video you have to watch several times because there are too many things to consume in just one viewing. One of the most covert, “damn I how did I miss that?” moments is the man draped in black riding past Glover and his dancers.

At first it may seem like a cooky artistic choice to throw a white horse into a rap video.

Until it sinks in that the man is dressed in all black like the Grim Reaper. And those of us who had to sit through Bible study are all too aware that in the book of Revelations, the Horsemen of the Apocalypse feature riders on a pale horse ushering in pestilence and death to destroy the world.

Donald Glover had Death riding into the frame on a white horse… with a police escort ya’ll!

While unaware Black children danced for our amusement in the foreground.

Look, if that inspired moment alone doesn’t get him nominated for somebody’s award I will be shocked. In fact, if the VMAs don’t declare this the “Video of The Year” there’s a high probability that Black Twitter will pull a Kanye and bum rush the stage.

Speaking of Kanye (although after last week’s exhausting media blitz, I’d rather not), it’s been said that Glover did with this four minutes what Yeezy has been (unsuccessfully) trying to do for the past four years; inspire a rigorous dialogue about the intersections of art, race, pop culture, and politically motivated group think.

And I couldn’t agree anymore. That’s exactly what happened.

But enough of that, back to Glover.

The use and treatment of guns in this video is one of the most jolting and yet skillfully nuanced aspects and it’s evident that this was by design. Our country is obsessed with protecting the 2nd Amendment, at times more than we are concerned about protecting our own citizens.

There are hints of this immediately, when the video opens up with a peaceful Black man (now identified as Los Angeles-based musician Calvin The Second – and NOT Trayvon Martin’s father as some speculated) is seated in a chair playing a guitar. He is minding his own business when suddenly he’s shot in the back of the head by Glover.

After this brutal execution takes place the gun is carefully swathed in fabric and preserved, while Calvin’s body is dragged away across the floor like cattle.

“This is America / Don’t catch you slipping up,” Glover sings to the camera without a shred of guilt, and then goes right back to gleefully dancing and making faces to wipe our minds clear of what we just saw.

And I hate to say this, but it worked.

By the time those adorable Black children in their school uniforms join him to do a perfectly choreographed medley of dances, that dead man’s body is all but forgotten, and the chaos happening in the background becomes surprisingly easy to ignore.

Then the gospel choir comes in to make us feel elevated again. Everybody knows that the easiest way to uplift the spirits of even the staunchest atheist is to have a joyful Black choir singing to the heavens, extra points if it’s a Southern choir at that.

When Glover sneaks in through the back door to join them in praise, his dancing feels well suited and almost appropriate. Until he pulls out a an AK-47 and kills them mid chorus.

Again, the gun is carefully cradled and taken away when he is done, as the dead church members bodies are immediately dismissed so we can move on to the next visual.

This is undoubtedly a nod to the Charleston shooting and one can’t help but wonder what the survivors of that massacre felt like watching it play out to a catchy beat.

Full blown riots are now taking place as Glover and the children continue to pick up the tempo. Until the 2:45 minute mark where he assumes the position of an unarmed Black man, who is still viewed as if he is going to shoot someone despite there being no gun in sight.

The idea of being seen as a potential threat even when there’s nothing on you to make that true is tiring. To that point, we watch a weary Glover put down his empty hands, and pull out a joint to smoke away that stress.

If you were in his shoes you’d probably need a couple puffs too.

4. The Kids Are Watching

I’ve made mention several times in this analysis about the use of children. How they are used as shiny, young distractions to our foolishness, while still bearing witness to all the ugliness that surrounds them.

The number of kids in this video is a statement in itself. Much has been written about the school-to-prison pipeline and how Black and brown communities get less resources to educate their kids, while the internet gives them a rich and layered education in escapism, violence and “Fake News.”

As adults of a certain age, we remember life BEFORE the internet and for the most part can still find our footing in some sense of reality. But what about the youngest of our millennials and the entirety of Generation Z? THIS America that Glover is exploring is all they know. All it’s dysfunctions are their only lived reality.

What impact will this have on them?

The video doesn’t seem to give an answer and frankly, I’m not sure I have one either.

After three and a half exhausting minutes the last thirty seconds of This is America ends with a random cameo by SZA while Glover dances on the roof of a car in the warehouse. For a second it begins to look like a normal music video again, the kind we see all the time flashing across our screens and smart phones.

UNTIL… the camera pans up and then back down to reveal our visibly frightened protagonist running for his life. We’re not sure if he’s running from the mob or a part of it looking for an escape. Are the people behind him attacking him? Or just trying as hard as he is to get free?

These last moments could easily be included in a trailer for ‘Get Out 2’ and a part of me is now praying that Jordan Peele sees this and decides to do a collaboration with Glover in the future. They have a lot in common, mainly being two bold, Black voices with comedic chops, who have a fresh way of attacking racial tensions that make it impossible to look away.

They’re also romantically involved with non-black women, which is why even now as I wax poetic about Glover’s genius, several dozen other writers have already begun publishing, “Your Fave is Problematic” think pieces about his propensity for dating Asians.

Color me un-woke, but this masterful piece of work makes it hard for me to care about who the Atlanta star is sleeping with. It’s too important and necessary for me to throw it out based on any personal feelings about Black male courting trends.

And to be honest those of ya’ll who are still listening to R. Kelly’s music don’t really have a moral leg to stand on with this one anyways because that’s what a real problem looks like.

This Is America may be one of the most intelligent music videos I have ever seen in my life, and I didn’t even see it coming. NONE of us did and perhaps thats the greatest point made by this project.

Life comes at you fast when you’re not paying attention.